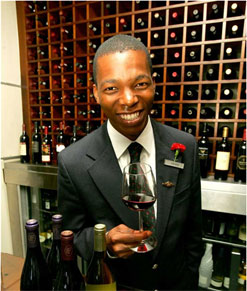 One of the brightest stars of South
Africa’s wine and hospitality industry.
(Image: Twelve Apostles) 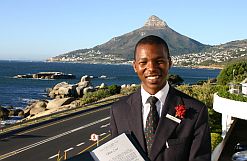 To be placed in the top five in a fiercely contested international event is no mean feat. As the top young sommelier in the South African leg of the competition, Ntezo travelled to Vienna to represent his country against contestants from Austria, Finland, Great Britain, Israel, the US, Portugal, Germany, Switzerland, Greece and France.

Christopher Muller of the US was the overall winner, followed by Great Britain with Greece and Austria in joint third place.

The Young Sommeliers competition is an initiative of the international gastronomic society La Confrérie de la Chaîne des Rôtisseurs, founded in Paris in 1950. The competition takes place in three stages – theory, service and blind tasting. Theory involves a one-hour written test and is designed to reveal contestants’ knowledge of areas such as wine, wine production, laws, viticulture and vinification. It also touches on other products such as spirits, beers, ales, ciders, ports and sherry.

In the service section, contestants show off their skill at serving, proving that they are adept at techniques such as preparing glassware, pouring champagne, and even bantering good-humouredly with their customers, the judges. Role playing shows up their level of poise, competence and professionalism, and contestants are also expected to provide innovative food and wine pairing suggestions. Finally, they are required to identify between six and 12 spirits using just the nose.

Blind tasting is the final segment of the competition and involves assessment of six wines by sight, nose and palate in aspects of wine colour, age, alcohol content, country of origin and appellation.

Each judge observes different aspects of candidates’ performance, after which the final scores are tallied.

“Following a string of local successes, we are over the moon that Luvo has achieved recognition by such an acclaimed society on a world stage,” said Clive Bennett, MD of Red Carnation Hotels, South Africa – the group to which Twelve Apostles belongs.

For a young man who had no idea how to pull a cork when he took his first job in the hospitality industry, the 24-year-old Ntezo has given every indication that a distinguished career in wine lies in wait for him.

He was born in the Eastern Cape but attended school in Cape Town, where his thirst for knowledge led him to study hard during his school career and afterwards, acquiring as much knowledge as possible in fields such as IT, maths and accountancy.

However, his first job was as a pool porter at the Steenberg hotel, which nestles among vineyards in Cape Town’s tranquil Constantia Valley. Not only was this the first time Ntezo had ever laid eyes on a grape vine, but he also quickly realised that having to enlist the help of guests to open wine bottles would not do much for his career. “I decided there and then to learn more about wine,” he recalled.

Steenberg’s winemaker John Laubscher and cellar master Herman Hanekom became Ntezo’s mentors and soon he was promoted to wine steward and barman at Steenberg. It wasn’t long before the Twelve Apostles noticed him and in 2003 offered him a position as barman in the Leopard Lounge.

His career took off after a wine tasting, where he spoke his mind about a wine that everyone else, including the sommelier, had praised. Numerous questions later, his employers realised that they had an oenophilic gem on their hands.

Management at the Twelve Apostles wasted no time in nurturing the promising sommelier, who now works in the hotel’s Azure restaurant. They sent him on various training courses at the Cape Wine Academy and encouraged him all the way. For his participation in the international Chaîne des Rôtisseurs competition they brought in wine expert Monty Friendship, who helped hone his knowledge of wine and food to the required standard.

Ntezo’s ambition is to be the Cape’s top wine master. With a string of certificates under his belt and now recognition as the fourth best young sommelier in the world, he seems set to achieve his dream.

A sommelier is expected to have extensive knowledge of wines and their suitability with various dishes. Part of a sommelier’s duty, therefore, involves knowing exactly which wine to recommend for each dish served by the establishment – this calls for a broad knowledge of food as well. Some hotels and restaurants also entrust the sommelier with stocking and replenishing of the wine cellar.

For Azure Ntezo has compiled an extensive, and award-winning, wine list featuring some of the Cape’s best wines. Azure’s wine selection was good enough to earn an award of excellence in 2007 and a diamond award in 2008 at the annual Diners Club Wine List awards.

Ntezo hosts regular complimentary wine tasting sessions for guests, and revels in sharing his knowledge about a subject he is so passionate about. The best thing about being a sommelier, he believes, is that he gets to sample a variety of local and international wines, and is able to enhance the experiences of hotel guests.

“I am so proud to work for the Twelve Apostles, as everything I have ever achieved in my career so far was made possible by them. Once again, thank you to everyone who believed in my ability and supported me. This is one award that I will never take home, but rather hang in the hotel as an inspiration to all my colleagues,” he enthused after his triumph.