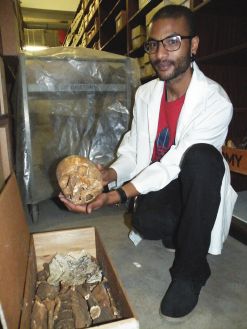 Up-and-coming South African scientist Brendon Billings is breathing new life into the field of science and human evolution. He is presenting Maropeng’s new Bone Detectives walking tour, which investigates the seven-million-year evolution of Homo sapiens through the many fossils found in the Cradle of Humankind, in Gauteng.

Through the tour, the 30-year-old Wits University scientist hopes to provide a new perspective on the field, inspire a love for science, and remind people about South Africa’s rich fossil heritage. And he does this in a fun and accessible way to demystify the subject.

“Bones provide clues and make it possible for us to piece together the evolutionary story,” Billings says. “They are the best preserved and we can use them to identify certain structural and behavioural traits, all of which give us a narrative in terms of human evolution.”

The tour is suitable for anyone who wants to know more about the science behind palaeoanthropology. Participants have the opportunity to compare different types of hominid bones, helping them to understand the hominoid skeletal anatomy and learn how to identify fossil remains.

He says evolution is an ever-changing field, and every fossil that is discovered provides new clues about how evolution took place. “Without the bones we wouldn’t have any evolutionary story to tell.”

Billings says he’s fortunate to have been introduced to evolution early on at university – he was set on a career in medicine, but when he didn’t get into the course, he opted for a science degree instead. “I was introduced to the wonderful idea of evolution. I was hooked,” he explains. “Science became my path of using evolutionary principles to understand the world and answer some of these fundamental questions.”

His job, he says, is just like putting together a puzzle, which is why he decided to call the Maropeng tour Bone Detectives. It draws on popular television series such as crime drama CSI and US medical drama Grey’s Anatomy. “I noticed that these programmes have generated a lot of interest in medical anthropology and forensics, and decided to build an event around this theme.”

Billings has completed his MSc in history of science at Wits, and now he’s working on his thesis on primatology and the evolution of consciousness. He was also recently nominated as a member of the prestigious Council for the Royal Society South Africa, a multi-disciplinary scientific organisation.

At the university, Billings assists scientists with their research in disciplines such as palaeoanthropology, forensic anthropology and neuroanatomy. He enjoys telling people about his work and he gives tours of the school to the public.

The first thing Billings does when you walk into his office is show you some of Wits University’s extensive fossil collections. He is the curator of all collections at the School of Anatomical Sciences at the Wits Medical School, including the Raymond Dart Collection of Human Skeletons. This collection is one of the largest documented cadaver-derived human skeletal assemblages in the world and the largest in Africa.

It was started in the mid-1920s by Dart, an Australian anthropologist known for his involvement in the 1924 discovery of the first fossil found of Australopithecus africanus, an extinct hominid closely related to humans, at Taung in South Africa’s North West Province.

“I had the privilege of working with him and he took me under his wing,” he says. “He was very humble and pleasant.” But he also recalls that Tobias had high expectations of his students – he always wanted students to bring pen and paper to his office and take notes.

“I don’t think I would have been in this field if it wasn’t for his influence and him believing in me,” Billings says. “Prof Tobias was patient with my questions, encouraging when I needed it and was my greatest advocate in the scientific community.”

Tobias, an internationally renowned palaeoanthropologist and Professor Emeritus at Wits, died on 7 June 2012. He worked with his students up until his death a few months before his 87th birthday.

● The next Bone Detectives walking tour at Maropeng takes place on 18 May. The evening starts at 18h00 with welcome drinks, followed by a dinner at the Maropeng Hotel and a discussion with Brendon Billings. Booking is essential.