Students from the University of Cape Town won a trip to an international conference in the US at a women-only hackathon.

Melissa Javan
A group of female students from the University of Cape Town won a hackathon on 6 August 2017 and will be attending an international information technology conference for women in the US as their prize.

The four women would be exposed to big American companies that had a female developer base, said the organisers. These included Microsoft, Facebook and Twitter.

Zandile Keebine, Jeanette Theu and Tinyiko Simbine, who all work at tech companies, are the founders of GirlCodeZA. Speaking to Brand South Africa previously, Keebina said she had been to many hackathons where she was either the only female or one of a few to attend. This prompted her to approach her employer to organise a women-only hackathon. GirlCodeZA started in 2014.

How the hackathon grew

According to Keebine, the purpose of the hackathon is for women to connect, network and inspire each other. “We want them to see they are not alone [in the male-dominated industry] and that collaboration is key.

“Just from this weekend’s event we can see there are many women in the tech industry.”

There were about 20 contestants in the 2016 hackathon; this year there were more than 80. “When we started out, it was just a fun thing to do. However, it seems the contestants are a lot more serious now. They understand that there are opportunities for them to position themselves,” Keebine said.

“The women are looking for bursaries and job opportunities. We asked them to send us their curriculum vitaes.”

She said the hackathon allowed the contestants to innovate and create solutions for everyday problems. They had 30 hours in which to design their response. “Each team then creates a website or an app or an internet of things solution. It is up to them to decide.”

Keebine explained that being able to create a solution showed companies that the developer had the skills needed in the industry.

And the winner is… Rubies!!! Congrats team, well deserved! Enjoy your time in the US! #GirlCodeHack 2017 pic.twitter.com/q5PwvBMd4W

Mzuku said: “It will be our first trip to the USA. We are still in shock [that we won].”

She and her three teammates are studying information systems in the Commerce Faculty at the University of Cape Town. “Our department told us about the hackathon and sponsored the trip.”

They will attend the Grace Hopper Celebration of Women in Computing, believed to be the world’s largest gathering of female technologists, in October this year. The event is produced by the Anita Borg Institute.

Thembi Mbatha, a contestant, said it was the first time she had taken part in this hackathon. “I came here knowing no-one. I’m a shy person,” she confessed.

“As a woman in the technology industry, an event like this makes you realise you are not the only one. It’s great to see more women are growing in the industry and coming up with solutions.”

She learned how to work in a team to create a solution, she said. “[The hackathon] is awesome. We also met mentors who groomed us. I’m also willing to share my skills in the future.”

Prudence Netshituka is a systems integrator who entered the hackathon as an individual. “It was scary to enter as an individual, and also it being my first time here. I had no idea what to expect. When I arrived here, there were others who had entered as individuals.”

They had to form groups and come up with an idea to solve a problem in their community. Each idea had to show how they differentiated themselves from other teams.

“It’s important to have such events,” said Netshituka. “It’s important for us to network, share knowledge and to know that we [women in the industry] are not alone.”

About the knowledge sharing that took place, she said: “Often when you are in the field, you tend to form a group with people who have the same knowledge as you do and you are limited to that information. Here we learned different types of technologies from each other.”

Both Netshituka and Mbatha said they had a lot of fun.

The importance of sisterhood

Gertruida Maritz, a software engineer, was one of the mentors; she helped the contestants come up with viable business ideas. “It should also fit in with the theme. The method on which each team builds their idea — for example, a website or an app — should be something the women are comfortable working with.”

Most of the ideas were related to the medical field, she said. “There was a solution related to the voting system, too, as well as something for business — how to make binding easier.”

Maritz was excited to see so many passionate young women in the technology industry. “There are some passionate and very smart ladies I’ve seen here. They have this fire in their chest. It reminds me of the younger version of myself.”

Mentorship and women supporting each other was a big deal — she was recently supported by a woman in the accounting department in her workplace. “It can get hard in a male-dominated environment. You have a lot of emotions as a woman, but you push through it.”

Whenever she had been in a difficult situation, it had been women who had helped her in her career.

#GirlCodeHack These girls ne… *chokes with pride* Mama Bear is so proud pic.twitter.com/i6V3JO1WVU 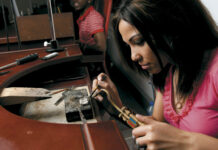 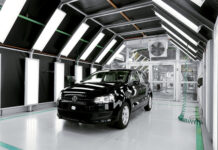