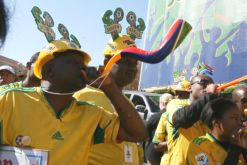 South African fan spirit is on a high as they prepare to host the 2013 Afcon.
(Image: MediaClubSouthAfrica.com. For
more free images, visit the image library)

The Orange Africa Cup of Nations (Afcon) is only days away, and the South African national team Bafana Bafana as well as the Ministry of Sport are urging fans to don their yellow jerseys and get behind the team and the event.

Bafana are playing their last warm-up match against Algeria at Orlando Stadium in Soweto on 12 January – fresh from a 0 – 1 defeat by Norway on 8 January in Cape Town, where they displayed a lot of goal poaching character, although they couldn’t rattle the net.

Bafana plays Cape Verde in the opening match on 19 January at the National Stadium at Nasrec, in the south of Johannesburg.

Norway is ranked 24 in the Fifa World Rankings, while Algeria and South Africa rank 19 and 87 respectively.

Ace up the sleeve

Bafana’s head coach Gordon Igesund heaped praise on Platinum Stars midfielder Thuso Phala after the Norway match, saying he was an “ace up his sleeve”.

Igesund said: “Just because he plays for a smaller team like Platinum Stars, and a lot of people don’t get to see him, doesn’t mean he is not a good player. He is quick and he is an out-and-out winger.”

Bongani Khumalo, Bafana’s captain, said: “We will have to keep working hard, but there were lots of positives in this game (against Norway), like the way we moved the ball. We played a good brand of football, but maybe at times we should get uglier in the box and gamble. But these are the things we will work on.”

Hundreds of fans gathered in Sandton on 9 January outside the Nelson Mandela Square in true African spirit, for the official 10-day countdown till the start of the tournament.

“Go and do us proud. We release you to go and compete with the best in the world,” said Sport and Recreation Minister Fikile Mbalula, who asked South Africans to show the spirit of ubuntu to other soccer-lovers who will be visiting during Afcon.

When South Africa last hosted the tournament in 1996 they triumphed, beating Tunisia 2-0 in the final at Ellis Park in Johannesburg. Their supporters are hoping for more of the same in 2013.

There are four groups in the 22-day sporting event that will also see two South African referees – Daniel Bennett and Zakhele Siwela – officiating at some of the matches.

The National Stadium will host the opening and final matches, while the other matches will be played at Mbombela Stadium in Nelspruit; Nelson Mandela Bay Stadium in Port Elizabeth; Royal Bafokeng Stadium in Rustenburg; and Moses Mabhida Stadium in Durban.

The Bafana squad is made up of:

After choosing the squad, Igesund said: “It’s very unfortunate that I could not have all the players in the squad as the Confederation of African Football rules stipulate that only 23 will be needed for the tournament.

“No matter how much we try, we can’t please all the people in the selection process, but I believe we have chosen the best that will represent this country well in Afcon 2013.”

The Gauteng provincial government has earmarked seven public viewing areas for fans to enjoy the tournament spectacle from.

These are in Orange Farm in the south of Johannesburg; the informal settlement of Diepsloot near Fourways, north of the city; Ivory Park in Tembisa on the East Rand; Diepkloof in Soweto; Sedibeng in the Vaal, Tshwane and Merafong in the Carltonville area.

MEC for sport, arts, culture and recreation Lebogang Maile told Sowetan: “The public viewing areas were a resounding success during the 2010 Fifa World Cup, which is why we have decided to bring them back for Afcon.”