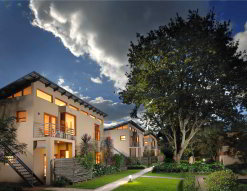 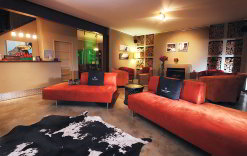 Guests can admire the artwork while
relaxing in the trendy lounge.
(Images: The Peech Hotel)

When James Peech relocated from Britain to South Africa, he didn’t think he’d be opening a hotel in the middle of Johannesburg.

After a lengthy spell curing their mutual wanderlust in south-east Asia, Peech and his South African partner Cassie Janisch planned to return to her homeland and settle in Cape Town. The Cape, however, did not prove hospitable to their ambitions for the hospitality industry and they decided to try their luck in the ostensibly less tourist-friendly Johannesburg instead.

Luck, fate or sheer serendipity? Call it what you will. The point is that they happened to find a charming house in the suburb of Melrose, north of Johannesburg’s city centre, at a time when the owners were looking to escape a massive construction project underway next door.

They saw the potential and, within a few years, their vision had been fulfilled: the construction site turned into über-trendy Planet Fitness at The Wanderers sports club, while the house and grounds nestling alongside were expanded into a tranquil and surprisingly spacious four-star 16-room boutique hotel.

That the Planet Fitness complex doesn’t intrude on the aesthetic or atmosphere of the Peech Hotel is largely attributable to architect Kate Otten, whose design for the extensions emphasised seclusion: hotel guests hardly feel that they are in the biggest city in the country, just a short distance from its commercial hub.

This proximity is, of course, appealing to business travellers, and The Peech boasts a 10-seater boardroom and workspace facilities for such guests. Yet judging from the diverse conversations and languages to be overheard in the hotel’s bar and lobby area, an equal proportion of the international clientele are leisure travellers.

Whether it’s business or pleasure that brings them to the Peech, those who stay there soon learn a thing or two about the art of living.

The Bistro, under head chef Greg Jardim, has developed a reputation for fine dining. After sampling the sundried tomato, asparagus and fennel risotto I was happy to concur; the Asian fishcakes with wasabi dipping sauce entrenched my opinion.

Then there was the duck confit served with polenta and a berry coulis, the sirloin with blue cheese sauce, the chocolate torte with Frangelico … it’s clear that Jardim and his sous-chefs are living up to their promise to create dishes that are both “laid-back and chic” with “an understated touch of sophistication”.

Robert Chifunyise is kept busy as resident sommelier; the Peech hosts monthly wine evenings, at which local vintners proffer a selection of wines paired with appropriate dishes. Connoisseurs of other beverages are not entirely neglected – earlier this year the Collective São Gabriel, a multi-national group of craft beer-makers, shared some of their luxury brews. And the hearty brunch on offer every Sunday morning is accompanied by an endless supply of Cap Classique Brut from Villiera Wines.

Care of the environment

The Peech, by example, also teaches another subject: eco-living. Certified for Fair Trade in Tourism, the hotel implements a strict sustainability policy incorporating solar water heating, double-layer insulation in rooms and the recycling of grey water from baths and showers.

In addition to operating with the environment in mind, Peech exercises a social conscience through charitable contributions towards the Little Eden Children’s Home in Edenvale, east of Johannesburg.

What would the art of living be without the visual arts? Sculptures from various African countries are displayed in the hotel’s rooms, augmenting the eclectic decor and sleek finishes. While works of art serve an anodyne decorative function in most hotels, however, this is not the case at The Peech.

James Peech has teamed up with art agent and curator Christina Wiese of Brown Spice Boutique to ensure that the hotel’s walls are continually adorned by new art works in various styles. As a result of these floating exhibitions, the hotel has become something of an informal gallery.

In 2009 an environment-themed collection of photography and sculpture that also displayed fashion, industrial and interior designs reinforced Peech’s passion for ecological sustainability. Artists who have subsequently opened exhibitions at the hotel include photographers Neil Corder and Babi Prokas; Layziehound, with his music-oriented pastel images; and Anupama Das, whose geometric designs tease and delight the eye.

The arts programme is ongoing, as are the wine evenings and other events. In fact, for such a calm and quiet place, The Peech is veritably abuzz with new developments – from landscaping of the already lush and leafy gardens, to plans to convert the poolside eating area into an al fresco deli.

All this activity can only bode well for visitors to, and residents of, Johannesburg. As for Capetonians … well, they’re likely to feel they’ve been missing out.