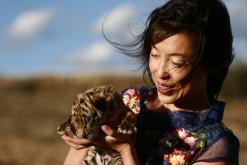 Laohu Valley Reserve founder and
champion of tigers Li Quan with one of the
cubs born to Madonna in August 2008. 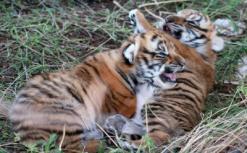 The two tiger cubs born on the Laohu
Valley Reserve during the Beijing Olympics.

The Laohu (“old tiger”) Valley Reserve in the Free State province is the site of a pioneering conservation project run by the non-profit organisation, Save China’s Tigers. On 18 August 2008, while the Beijing Olympic Games were in full swing, a South China tiger named Madonna gave birth to two cubs in completely natural conditions, 11 000km away from home.

The two cubs – a male and a female – were left alone for the first 10 days, a critical time for their survival as during this time the chances of their mother abandoning them are higher if she is disturbed. They are reported to be thriving and are said to have hissed when finally approached by staff.

The sire is a four-year-old male named Tiger Woods. Madonna gave birth to two cubs in April 2008, but only one survived.

The Save China’s Tigers project was founded by UK-based Li Quan, nicknamed TigerLi for obvious reasons, who holds a BA degree from Beijing University and an MBA/MA from the Wharton Business School and the Lauder Institute of Pennsylvania University.

Save China’s Tigers also has the support of a number of high-profile patrons, among them screen stars Jackie Chan and Michelle Yeoh, acclaimed pianist, Lang Lang, and conductor Christoph Eschenbach.

Established with the aim of not only breeding the magnificent creatures but re-wilding previously zoo-bound tigers – essentially teaching them how to be tigers again – the project is regarded as one of the most ambitious conservation programmes in the world. While the critically endangered tigers learn to hunt, prey and survive in the South African wild, conservationists back home are working to establish new tiger reserves in Jiangxi and Hunan provinces, a process that could take years because farmland has to be restored to a forest environment.

Li plans to return all the South African-born tigers to China within 15 years, but her medium-term goal is to send at least one animal to its new home by the end of the decade. The original tigers will return to zoos, having passed on their newly-acquired hunting and survival skills to their offspring, who will grow up as wild tigers.

Laohu Valley Reserve was established near the small town of Phillipolis in the Free State by Li and her husband, fellow Wharton alumnus and investment banker Stuart Bray, who bought the land for her. It spans 33 000 hectares in both Free State and Northern Cape provinces, with the Orange River, South Africa’s largest, running through the property. The reserve is only open to staff, donors and volunteers.

Li chose South Africa because of the country’s illustrious track record in conservation matters. “Wherever I went in southern Africa, I found South Africans involved in such projects,” she said. “I thought they must be the best. I eventually persuaded the Chinese government to work with them. I pointed out they had saved endangered species like rhinos and were not desktop scientists.”

The project was initially meant to be a collaboration between China, South Africa and India, whose conservation experts are among the rare few who can claim field experience in managing tiger habitats. The Indian team opted out but reports indicate that China is still keen to get its Indian counterparts on board.

In 2004, four carefully selected South China tiger cubs were sent from zoos to the reserve. Three of the animals – the male, Tiger Woods, and females, Madonna and Cathay – have done well but the second male, Hope, died from pneumonia and heart failure in 2005. A new male, named 327 after his registration number in the International Zoological Association’s studbook registry, was introduced to the two females in April 2006.

In spite of criticism from many wildlife experts, the first stage of the project, that of teaching the captive tigers to hunt, has been declared a success. Experts say that conservation of China’s tigers would work best in that country, but that is not possible at this stage. In the meantime the South Africa programme is stepping into the gap, say its supporters.

In September 2008 Li and Bray were invited to Namibia to attend a council meeting of the newly-established Leadership For Conservation in Africa, an endorsed flagship programme of the New Partnership for Africa’s Development. This South African Parks Board initiative aims to involve business leaders across African countries in wildlife conservation. They are urged not only to contribute financially, but also to incorporate conservation in all their in business practices.

Conservation representatives from 26 countries attended, as well as guests such as philanthropist Howard Buffet of the Howard G. Buffett Foundation, while Namibian President Hifikepunye Pohamba of the former liberation movement Swapo gave a keynote speech.

On the brink of extinction

Since the start of the programme, five South China tiger cubs have been born on the reserve – the oldest cub, born to Cathay in November 2007, was the first ever to be born outside China. However, the latest birth is the first to happen without human intervention or observation.

This is crucial to the programme, according to Li, who says, “This is a major achievement in tiger conservation history. It is the first time ever that the cubs were born completely in natural conditions without any human involvement. We are delighted that they were born during the Olympics when the world has renewed interest in China. History has been made.”

According to the World Wildlife Foundation, the South China tiger (Panthera tigris amoyensis) has not been seen in the wild for more than 25 years and a number of scientists believe it to be “functionally extinct”. This means that there may still be a few individuals alive but there is little hope for their survival because of critical factors such as inadequate habitat or prey, a few animals spread out over a vast distance, or lack of individuals in one or both sexes.

The population of the South China subspecies of tiger was estimated at 4 000 in the 1950s but it has now been hunted to the brink of extinction. The animals were even declared extinct by the World Bank’s Tiger Conservation Initiative, which was launched in June 2008 at the Smithsonian’s National Zoological Park in Washington. This makes her fund-raising job a lot more difficult, says Li, as potential donors are not readily willing to help an animal that apparently doesn’t exist.

Poaching is the biggest threat to the tigers’ survival, says the World Bank, and while punitive measures are available they are often not applied or are applied inefficiently.

While poaching and habitat loss are major issues, the cats also face the problem of lack of genetic diversity. Inbreeding is common and can leave its mark on zoo animals in the form of crooked necks or short tails. This is not the first time a species has had to overcome this problem, however. Scientists believe all of today’s cheetahs are the descendants of a handful of animals that survived a similar bottleneck about 10 000 years ago.