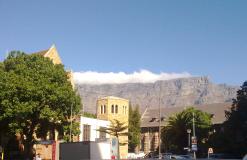 Hummba, a homegrown mobile application
for travellers, is available for Cape Town
and many other locations around the world.
(Image: Janine Erasmus)

The idea is so simple, but genius – audio travel guides. Most everyone has a mobile phone these days, and most everyone won’t leave home without their trusty device.

Hummba feels this love, and runs with it. You can download its audio travel guides to your cellphone – for free – and then plug in and play when you’re in a foreign city, or even taking a sho’t left (South African slang, meaning “the next left turn”) around your home town.

There are many benefits – turfing bulky guidebooks out of your luggage makes for a much lighter backpack or more space for souvenirs in your suitcase.

And you never have to find a place to sit down to thumb through a well-worn or torn printed tome to get information. It’s all on your phone, all the time, exactly where you are.

From its home base in the trendy Cape Town suburb of Woodstock, this South African innovation is making waves around the world, and already has offices in Spain and New Zealand.

It went live in 2011 and featured as number 18 on the list of top 20 startups in Africa in the February 2012 issue of Forbes Africa magazine.

The name Hummba is derived from the isiZulu word “hamba”, meaning “to go”, but, says founder Mark Allewell, that url was already taken.

Tourism Radio, Hummba’s parent, was started by Allewell in 2005. A journalist, qualified tour guide and diehard traveller, Allewell combined all his passions and – with some help from engineering students at the University of Cape Town – came up with the concept of the radio travel guide.

The daddy of the pack is a black tourism radio device placed in a hired car. Using GPS technology, the device guides you round the city you’re visiting, talking to you about the places you are seeing, building the information as you drive.

It’s hugely popular in New Zealand and among older, less tech-savvy travellers. Tourism Radio was picked up as an innovation on the Discovery Channel. The show was seen by a German family, which promptly boarded a plane for the Mother City to talk business. They bought the company in 2006 and are taking it global.

“We realised the cost implications of trying to take these devices to new countries and decided it would be cheaper and more effective to combine mobile technology with our product,” explains Allewell, now Hummba CEO.

“Tourism Radio’s holding company is in Switzerland, but, using our offices and recording studios in Cape Town, New Zealand and Spain we brought out Hummba in beta in 2011.”

The Hummba guides combine GPS and mobile technology, with Hummba-created content recorded in the company’s three studios, using local guides and fact checking with local tourism authorities. What you get, simply by listening to your mobile phone, is a personal tour guide giving you first-hand information.

The programme creates the personal guide as you walk or drive, so it is always specific to your exact location. It is also always current.

Already there are 400 hours of recorded guides for hundreds of popular tourist destinations in 100 countries.

More is to follow, with some top-notch quality: Hummba has signed a global agreement with Frommers, the world-renowned travel guide publishers. It will use Frommers’s content, adding it to what it already offers, says Allewell. The launch is planned for 4 April.

While the Hummba application is still being developed, there are working versions for Android and the iPhone. Users can download the free app on their smartphone before they leave and, once at their destination, they just open it and they’re off. There is no need for wi-fi access, or Bluetooth or any internet connectivity.

“Digital travel is really big,” says Allewell. “About 800 000 text travel guides are downloaded each month. I predict that in about two years travel books will be phased out.

“With Hummba on your phone, you can track your route in the city you’re visiting, add your journey to Twitter or Facebook, upload pictures and keep your friends and relatives up to date on where you are and what you’re doing.”

Hummba will launch its guide shop on March 26 and is in the process of setting up white-labelling deals, through which it will sell its certified content, unlabelled, to organisations such as Cape Town Tourism.

“It is our app, with no names on it. Then the other organisation can put their branding on it. We’ve also signed a deal with Renault so the app will come pre-installed in its cars. White-labelling will help to spread our technology.”

At present most of the audio guides are only available in English, though there are some Spanish ones, distributed by the Spanish office. By the end of 2012 they will all be available in Spanish, as well as in German, Italian and French.

There are other ideas in the pipeline for the technology, to be made public as the year unfolds.

“This technology can do a lot,” says Allewell.

Despite the global nature of the company, Allewell says it has stayed true to its relaxed, extrovert roots. “We dress down; sometimes come to work barefoot. And we still travel as much as possible.”