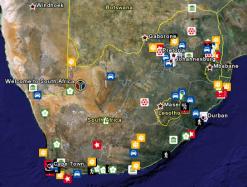 The inaugural E-consultancy Innovation Awards were held early in December 2008. E-consultancy is a leading light in the fields of digital marketing and e-commerce, and is also the UK’s major online publisher of internet marketing research and how to guides, as well as best practice reports.

The company instituted the awards in 2008 to recognise clients, suppliers and agencies for their innovation and success. The competition, which featured 14 categories, attracted some 230 entries from all around the world.

The South African Google Earth layer easily caught the judges’ attention and earned Quirk top marks in the category of Innovation in Search Engine Optimisation (SEO)/Natural Search. In the final round Quirk was pitted against digital marketing agency and SEO specialist Guava, and Linkdex.com, which is currently building an index of the internet based on the varying degree of influence of a web page.

While the E-consultancy award does not have a monetary component, Quirk staff is ecstatic with their achievement.

“It’s fantastic to see the international community acknowledging the work coming out of South Africa,” said Quirk CEO Rob Stokes. “As one of the largest European awards in innovation, with judges from prestigious companies like Apple, the BBC and Whatif!, we are tremendously proud of our achievements and look forward to showing the world what South Africa is capable of.”

Stokes added that the concept had all the elements the judges were looking for. As well as being interesting and ground-breaking it encouraged a high level of user interactivity. According to E-consultancy, Quirk’s work with the South African Tourism website elevated it above the other entries in its category.

E-consultancy praised Quirk’s collaboration with Google Earth, saying that it was an extremely innovative way of engaging with visitors to the South African Tourism site. It also improved natural search visibility by driving the creation of more external links to the site.

The South African layer was designed to promote the country as a top tourist destination and to help potential visitors plan their trips. It features more than 120 points of interest ranging from scenic drives, safari destinations and cultural attractions to 2010 Fifa World Cup venues. Maps, terrain and 3D satellite imagery provide visual enticement while the itinerary planner makes it easy for holidaymakers to put together a trip to remember, without having to move away from their computer.

The project took about three months from initial development to implementation and, said Marketing Manager Tim Shier in his blog, meant that the Quirk team had to quickly learn an entirely new markup language (Keyhole Markup Language or KML, created especially for use in Google Earth). But the team’s fresh approach to the use of Google Earth elements, and a dedicated supporting website, has proven to be a roadmap for success.

Amongst the hundreds of user-created layers, the South African layer was only the third, after those of New Zealand and Egypt, to receive official Google sanction and to be integrated into the core of the application.