This World Aids Day on 1 December the HIV epidemic gets a shot of hope with the launch of the Search for the Next Positive Hero SA, which aims to create HIV-positive role-models for the five million South Africans living with the virus.

The project is an initiative by the Change the Stigma Project, founded by Charles Jacobs, the first openly HIV-positive finalist in the Mr Gay South Africa competition. In 2011, when Jacobs was nominated as a finalist, he took a courageous step. Having lived with the HIV virus for nine years, he decided to disclose his status publicly, the first time any finalist had done so, and challenge the humiliation associated with HIV and Aids.

“People living with HIV often say the stigma they encounter is worse than the disease itself,” Jacobs says. “That stigma is exactly what prolongs the journey from denial to acceptance for anyone who is HIV positive, and is what we aim to change with the search.”

In 2012 the NGO Positive Heroes chose Jacobs as their first positive hero. This prompted him to create the Change the Stigma Project, to search for more positive role-models.

“This is not a beauty pageant,” he says. “It is the exact opposite. It’s about sharing your journey that will help others accept who they are. It is about moving away from feeding HIV with fear, and filling it with hope instead.”

Trevor Kleinhans, the author of Secrets Make You Sick, joins the search as a patron. Using his public speaking and press experience on the subjects of HIV, gay rights, sexual abuse and drug abuse, he will help spread the message of hope.

“Disclosing one’s HIV-positive status is an immensely powerful act,” he says. “In one moment it takes everything negative that society assumes about the disease, and turns it on its head. To see a person full of vitality openly sharing their story, for someone afraid of the judgment of friends, family and the public, is quite simply life-changing.”

Beginning on World Aids Day on 1 December 2014, contestants will be able to enter the search by visiting the Change the Stigma Project website.  Once finalists have been selected in March 2015, the public will be able to vote for their favourite positive hero. It is then that the journey begins.

Positive Hero finalists will share their personal HIV journey via a self-made video. They will then select their own South African HIV charity or non-profit organisation and create an awareness and fundraising project for them, in this way challenging misconceptions about people living with HIV.

“Stigma and discrimination has helped the spread of HIV,” says Jacobs. “It’s made people afraid to test and prevented often the most vulnerable from getting care. It’s time that the human progress in how we handle HIV/Aids in our community begins to match the advances being made in the research lab.” 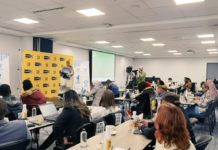