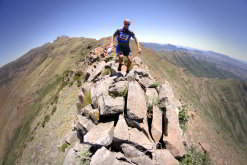 A Skyrunner seems on top of the world
as he tackles one of the tough mountain
route’s challenges. Runners are rewarded
for their efforts with stunning scenery.
(Image: Media and Kelvin)

South Africa, like most of the continent, is a land of great challenges but also of great opportunities.

With the resulting mindset of effort and reward, it is perhaps not surprising that the country should host some of the world’s most gruelling endurance sports events, in which athletes put their physical and mental stamina to the ultimate test in their goal to make it to the finish line – in itself an achievement of the highest order.

Heading the list of these tough events is undoubtedly the annual Comrades Marathon ultra-distance road race between the cities of Durban and Pietermaritzburg in KwaZulu-Natal province.

This taxing event attracts athletes from around the globe. Entries for the 2011 race, the 86th edition, closed at the end of November after the cap of 18 000 participants set by the Comrades Marathon Association was reached.

Dubbed the “ultimate human race”, the Comrades was officially recognised as the world’s largest ultra-marathon after 14 343 runners crossed the finish line within the 12-hour cut-off time in this year’s event.

But while the Comrades might be South Africa’s best known ultra-sports event, the country hosts a variety of lesser known but equally demanding endurance challenges in which participants pit themselves not only against their own limitations but also against the elements.

Two of these epic events take place in the Eastern Cape, known as the country’s adventure province because of the outdoor action opportunities its diverse landscapes offer.

They are the Salomon Skyrun, which requires participants to tackle a 100km unmarked mountain trail in a continuous run at an average altitude of 2 500m, and the Southern Shamaal Surf Ski Challenge, which sees paddlers cover a 250km stretch of ocean between the coastal cities of Port Elizabeth and East London, over four days.

In the neighbouring Free State province, horse riders and their mounts set out to cover a fast-paced 201km over three consecutive days in the annual Fauresmith Endurance Ride.

The 13th edition of the Skyrun took place in the Eastern Cape’s mountainous north-eastern highlands in November. The event drew a record field of 159 intrepid starters prepared to tackle 100km of tough terrain along the ridgeline of the southern Drakensberg mountains, from the picturesque Victorian town of Lady Grey to the Wartrail Country Club, in a quest for the prestigious Sky Runner badge of honour.

According to race organiser Adrian Saffy, this was almost three times the usual field and most of the entrants were Skyrun novices, with only 40 participants having any previous experience of the legendary event.

He attributes the huge growth in the number of entrants this year to increased awareness of the race through support from a number of adventure brands, as well as to “the motivating mixture of fear and anticipation of taking on an unknown adventure – the feeling Skyrunners live for”.

“The Skyrun is not a race, it is a journey,” he warned in pre-run publicity material for the self-supported event that challenges participants not only with distance but also the rigours of running at altitude and the terrain’s ascents and descents, compounded by darkness after nightfall and the sometimes bitterly cold night temperatures.

“There is no guarantee you will finish the route, no matter how much you train and prepare.”

With runners facing many hours of solitude in the wilderness, the event has a mystical element to it and is a test of mental and of physical fitness. Navigational and basic survival skills are also required – this year one runner got hopelessly lost and was found 50km off course after a search.

The last entrant finally reached the finish line after an epic 35 hours – more than 20 hours behind the winner, Iain Don-Wauchope. In his second Skyrun victory, Don-Wauchope finished in 14 hours 56 minutes – 90 minutes ahead of second-placed Bruce Arnett, also a previous winner.

Only 59 runners managed to complete the full route, with another 76 completing variations, says Saffy.

Toughest surf ski race of all

A field of more than 130 paddlers in single and double surf skis took to the water in what is now one of the world’s longest-running ocean paddling races, with the inaugural event taking place way back in 1971.

Traditionally held every second year, a three-year sponsorship by the Dubai-based Shamaal Group has enabled organisers to stage the event annually since 2008, although last year’s Challenge – as it  is simply known – was a team relay, to give  prospective solo entrants a gentler introduction to the event.

South African paddling stalwart and multiple Challenge winner Oscar Chalupsky has described the contest as “pure hardcore racing – one of the single toughest physical events in the world and the longest and most gruelling surf ski race anywhere”.

The race along what can be a treacherous coastline demands skill, stamina and mental and physical endurance, as well as a comprehensive air, land and sea support, safety and rescue network. The sea, sun and wind conditions are all part of the make-or-break equation, while ocean creatures like sharks, whales, jelly fish and blue bottles are also dangerous factors.

According to race organiser Anton Erasmus, the sheer isolation of being alone on a vast ocean, without the option of simply stopping when the going gets too tough, is psychologically demanding for challengers, who paddle distances of up to 75km a day as they make their way up the Eastern Cape coast.

Challenge for horse and rider

In the Fauresmith Endurance Ride, staged from the small Free State farming town of Fauresmith, riders and their mounts also cover up to 75km in a day to conquer a total distance of 201km in three days, over terrain ranging from flat grassland plains to the ridges and rocky slopes of the area’s low hills.

Because the event is held in mid-year, the days usually offer mild and pleasant riding conditions for both humans and horses. However, the below-freezing temperatures of the Free State winter nights bring a challenge of their own and riders are known to get up regularly during the long dark hours to check on their mounts.

The event has its origins in a 1964 argument in which a national farmers’ magazine debated the endurance capabilities of various horse breeds.  It was decided to settle the matter with a test, and an Arabian took the honours.

The inaugural Fauresmith Endurance Ride, held nearly a decade later, grew out of that contest. From the initial field of 17 riders and horses, the event now attracts more than 400 participants, ranging from pre-teens to septuagenarians, keen to not only tackle what has been described as the ultimate challenge for horse and rider but also to experience the warm hospitality and sense of camaraderie for which the event has become known.

The horses are checked by vets at regular intervals during the race and any animal deemed to be under strain is withdrawn, resulting in a sometimes much reduced field of finishers as another tough event exacts its toll.