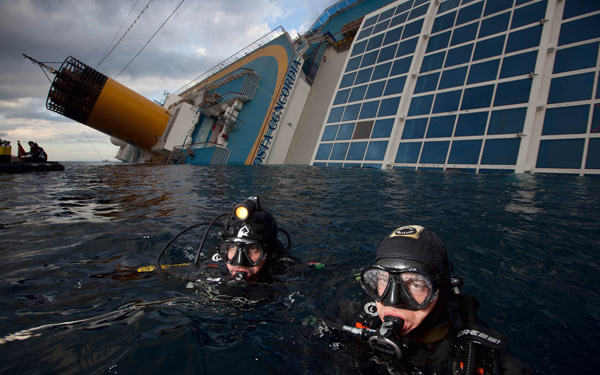 The wrecked Costa Concordia cruise ship began her final voyage on 23 July, after spending more than 600 days partially submerged near Isola del Giglio, Italy. The wreck is being towed to the north-western Italian port of Genoa, where she will be dismantled for scrap.

The city is home to the ship’s owner, Costa Crociere Spa, and the trip will take four days. The Associated Press reported that boat sirens wailed and bells tolled on the island just before two tugboats pulled the Concordia away from Giglio’s port.

Accompanying the tugs and Concordia, moving at two knots, or 3.7 kilometres an hour, are several boats to monitor any pollution in the waters, which are home to dolphins. Nets have been attached to the sides of the liner in case any remnants of the last passenger cruise, such as dishware, pots and pans, bed linen, chairs and other furnishings, tumble out.

The cruise ship capsized after striking a reef on 13 January 2012, killing 32 passengers and crew members. A South African has been at the helm of the greatest salvage of all time: Captain Nicholas Sloane is the senior salvage master on the Costa Concordia Removal Project. The complex salvage operation, for which a technique called “parbuckling” was used, was the largest and most expensive in history. The actual parbuckling took 19 hours, and when it was complete, the ship’s horn sounded above the crowd’s shouts and cheers.

A week after she was refloated, the Costa Concordia was slowly raised off the reef for her final journey.

The Costa Concordia was sailing in the Tyrrhenian Sea with more than 4 200 passengers and crew when she struck rocks off the Italian island of Giglio, ripping a 48.7m gash in her hull. The ship began to list and soon lost power when the engine room flooded. Despite the growing disaster, the order to abandon ship was not issued for more than an hour. The evacuation took more than six hours. In all, 32 people were killed, and the body of one presumed victim, Indian waiter Russel Rebello, was never found. A search for his body on the seabed, where the ship lay, will begin on Friday.

Removing the Concordia and taking her to Genoa would cost $2-billion, Costa Crociere chief executive Michael Tamm said. The ship, which first sailed in 2005, cost about $570-million.

Watch the 19-hour raise of the Costa Concordia, in 2 minutes

Sloane said the Costa Concordia was the biggest ship ever salvaged with the use of external buoyancy only. “This means placing 32 sponsons around her like arm-bands on a kid to swim [water-wings].”

Her location made the feasibility of such a technique almost impossible, and most other salvage companies around the world said that it could not be done, citing various reasons.

“First, we had to support the ship on the edge of the underwater cliff – so that she could not fall down into deeper water. She was resting on two outcrops – roughly 100 metres apart – so we had a valley of 100m wide, with a depth of up to 25 metres beneath the ship’s hull. There was no support for 100 metres to the bow or 100 metres to the stern,” explained Sloane.

“We had over 120 divers placing grout bags on the seabed [and] then filling them with grout cement. Over 24 000 tons of grout was used and the finished result had to be as good as a bed mattress – to support the Concordia when we parbuckled her last September.”

He said that once parbuckled, “she came to rest on six platforms – three large platforms under her belly and three smaller ones under her stern section. The bow was supported by a huge neck brace, allied a blister tank. These were 6 500 cu/m [cubic metres] of buoyancy to support her weight forward of the reefs.”

Drilling into the granite rock was extremely difficult, given the angle 25 to 35 degrees and the need for accuracy – the holes had to fit the legs of the platforms, which were being made all around Italy. The hole diameter was two metres and the drill head weighed over 70 tons, but the legs fitted perfectly once the platforms arrived.

The weather added to the difficulty, Sloane said. Over the winter seasons it was far worse than predicted, “with three times 10-year storms encountered we lost almost 100 days the first winter alone, on the drilling programme”.

People on the job

Sloane said that getting the right people to carry out the project, and stay with it as continuity was vitally important, was a big part of its success. “To develop a long-term salvage plan, and then be able to adapt it at short notice without having a negative impact on other phases of the project, requires a core team that can follow the changes and then drive the changes to get off the critical path.”

Dedicated to the job

A job of this nature does not offer regular hours and Sloane said that it had been very difficult for him to be away from his family for such long periods of time. “Being away from my wife, Sandra, and children, Nicola, Johnathan and Julia-Raine, is extremely difficult. Normally a salvage operation is over in in five to 10 weeks, with wreck removal taking longer, but seldom more than a year. This project has been very demanding and has kept me away from them a lot, maybe only had three months at home in 27, with them visiting me here for a few weeks in school holidays.”

A love for the ocean

With a deep love of the sea, Sloane maintains that salvage is his calling; he is incredibly passionate about his profession. “I always loved the sea, water, so I went into the Merchant Navy in 1980, with Safmarine, on general cargo ships, bulk carriers and containers ships. After the Castello del Belver in 1983, I found out that Saftug was a division of Safmarine, and requested a transfer. I found the salvage towing and offshore sector of the maritime industry far more attractive for me and have been involved in it ever since,” he said.

Francesco Schettino, the Italian captain of the Concordia, is on trial in Tuscany, the sole defendant. He stands accused of multiple manslaughter, causing the wreck and abandoning ship while hundreds of passengers and crew were still aboard the badly listing liner. He claimed the reef was not on the liner’s nautical charts.

The calamity will never be forgotten. “Every time I walk on board and around the ship, it feels very eerie and makes you realise how tragic the whole incident was,” said Sloane. “It is something that I will never forget.”