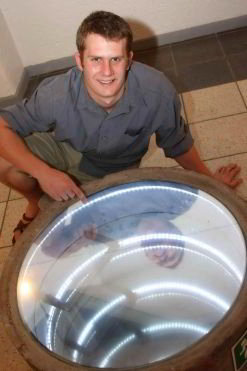 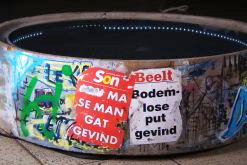 Urban spaces and urbanisation is a central
theme of the Daling’s piece, which is
represented by the concrete casing of the
sculpture that is covered with graffiti and
posters of newspaper headlines.
(Images: Association of Arts Pretoria)

South African fine arts graduate Roelf Daling is this year’s winner of a prestigious national competition that encourages artists to think creatively about using cement as an artistic medium.

The YCSA has been running for 20 years in an effort to raise the profile of cement, promote artistic empowerment and recognise the value and beauty of art in South Africa.

The competition is open to anyone and the only specification is that concrete is used as the medium to create the art piece.

“Concrete is a completely underutilised art medium. The competition offers great exposure for artists who want to use concrete and the quality of artwork we received was outstanding,” says Nomzamo Khanyile, public relations manager at PPC.

Khanyile says that close to 60 entries were received this year, which is a high number for a niche competition of this kind.

Roelf Daling graduated from the University of Pretoria with a Bachelors of Fine Arts in 2010 has been working as a fulltime artist this year. Winning the competition came as a complete surprise.

“I am so surprised that my work won,” he says.

According to feedback from the judging panel, all were in agreement that Daling’s work is “conceptually stimulating”.

He says that he enjoyed the challenge of working with concrete. “It is such a versatile medium. You can paint it, polish it and buff it and it’s affordable,” he says.

His winning sculpture is a prime example of how artistic expression can change perceptions about concrete, traditionally only thought of as a building material used for construction purposes.

‘The hole we found’

The sculpture combines his interest in new media art – which was also his university major, technology and well-known symbols often associated with cities.

At the centre of the sculpture is an old manhole pipe.

“I watched this piece of manhole that was lying next to the road for several months on end. It was forgotten at a bankrupt construction site,” he says.

To communicate the theme of infinity, he fixed LED lights and two-way mirrors to the pipe, creating an illusion of a bottomless shaft with a descending ladder.

This represents the continuous expansion of cities, and their vast network of tunnels that are constantly built to carry water, gas, electricity and digital information.

Another theme central to Daling’s piece is urban spaces and urbanisation, which is represented by the concrete casing of the sculpture that is covered with graffiti and posters of newspaper headlines.

“We put the two posters there for fun, but these and the graffiti art are also symbols of the city,” he says.

Daling’s primary focus is on interactive installations and using technology such as infrared lighting, lasers, projectors, mapping, computer vision and software programming in his art.

However, since he graduated last year, he has been experimenting with bronze sculpture and graffiti stencilling. He hopes to combine these mediums with his new media artwork in the future.

Khanyile says that next year PPC would like to expand the scope of the competition to include functional art such as concrete crockery and jewellery.

“The quality and direction of the various sculptures never fails to inspire, especially as new innovative techniques are discovered and used,” she says.

The Young Concrete Sculptor exhibition runs from 3 to 23 November 2011 at the Association of Arts in Pretoria, 173 Mackie Street, Nieuw Muckleneuk.