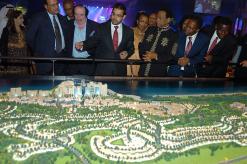 Zulu king Goodwill Zwelithini and Ruwaad
developers at the launch of AmaZulu World
in Dubai. (Image: The Mercury)

Dubai-based developer Ruwaad, a member of the Dubai 9 group of companies, has announced plans to build a mega-scale themed entertainment development on the north coast of KwaZulu-Natal (KZN). Known as AmaZulu World, the development will be the largest and most comprehensive of its kind in Africa, according to the company.

Making the announcement at the Cityscape 2008 real estate exhibition in Dubai in early October 2008, Ruwaad described the proposed R44-billion ($5-billion) project as a master-planned, uniquely African destination development which will cover about 16 500ha of land.

Ruwaad chair Hanif Merchant said the company was very proud to be leading the development and bringing a world-class destination experience to African investors, residents and tourists alike.

In addition, the development will have its very own Statue of Liberty in the form of a 106m-tall figure of iconic Zulu king Shaka, and will be a key cultural element of the development.

The sports village will offer cricket, rugby and tennis facilities and, says Merchant, will be an ideal place for English and European teams to practice during their off-season.

AmaZulu World is expected to become one of Africa’s premier destinations, an expectation supported by the forthcoming Fifa World Cup which South Africa hosts in 2010, and the corresponding investment in infrastructure upgrade and increase in foreign investment in telecommunications- and tourism-related projects.

These factors, say Ruwaad, and others such as its excellent year-round climate and outstanding natural beauty, made the country a natural choice for the project. However the company is also impressed by political and economic developments in recent years in South Africa which are pushing it to the forefront of emerging world markets.

A royal seal of approval

The project has received endorsement from KZN premier Sibusiso Ndebele and Zulu king Goodwill Zwelithini kaBhekuzulu, both of whom were on hand at the announcement in Dubai. “Ruwaad has demonstrated to our community its firm commitment to developing a destination that fits with our area’s unique natural, cultural and historical character,” said Zwelithini.

“With confidence, the local community is hugely excited to welcome Ruwaad to our province, and we look forward to the future employment, and economic growth that will contribute to the sustainability of our area; for the inhabitants of today and those for generations to come.”

The project is expected to create more than 200 000 new jobs and increase regional tourism by around 40%, according to initial research conducted by local consultancy Pam Golding Hospitality. AmaZulu World will be built in phases over 25 years, with completion of the first phase planned for 2012 to 2014.

However, there are a few displeased local community members who are opposing the development as they do not wish to be relocated. The eMacambi clan, owners of some of the land where development will take place, say they will take the matter to court if necessary. A spokesman for Ndebele has said that government and the developers will consult with everyone involved and that all the required legal routes will be followed.

Situated just north of the Thukela River, which originates in the Drakensberg Mountains and meanders through the KZN Midlands before flowing into the Indian Ocean, AmaZulu World will straddle both sides of the national N2 highway, which connects the province’s capital Durban with Richards Bay and other developing areas in northern KZN.

It will also lie conveniently close to the new R8.85-billion ($1-billion) King Shaka International Airport, currently under construction at La Mercy, 30km north of Durban. The new airport will replace Durban’s existing international airport and is expected to be operational by 2010.

The eco-friendly tourist destination will be designed to have a minimal impact on the area’s natural surroundings and will incorporate entertainment, sport, leisure, hotel and residential destinations, boosting economic growth in the region.

In addition to the theme park, shopping centre and sports village, tourists can expect to enjoy a wide range of activities and facilities, including hotels, resorts and spas, an agricultural village, and a marina. The development will also feature residential homes and offices as well as six golf courses, an equestrian estate, a nature reserve for those who seek more restful forms of leisure, and 22km of beachfront. Education, community, medical, emergency and security facilities will be available.

AmaZulu World’s vision, according to Ruwaad, is to be African in identity and world-class in standing, in order to attract visitors and residents from around the world to the region.