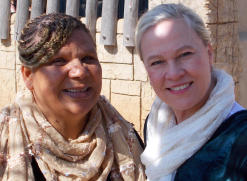 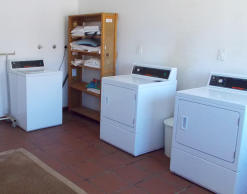 Before the laundry at Ebenezer was built, all the washing was done by hand in tubs – and that’s for around 140 people.

Mama Shirley and Prof Elain Vlok, with Margaret and Miekie, inspect the work going on in the bakery. 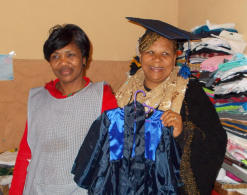 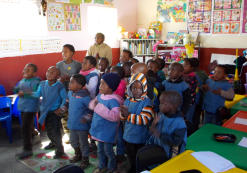 This group of preschoolers is in the capable hands of Teacher Felicity.
(Images: Janine Erasmus)

The Ebenezer Hannah Home in Ennerdale, a suburb in the deep south of Greater Johannesburg, is one of the beneficiaries of dairy producer Clover’s empowerment project Mama Afrika. It’s also one of Brand South Africa’s CSI projects, and deservedly so.

The home stands on an undeveloped piece of land just off the N1 freeway. It’s instantly visible because it’s painted bright yellow, and it’s surrounded not by other buildings, but dry veld. Ebenezer is run by the deeply devout and committed Shirley Merime, or Mama Shirley as many know her.

She started the initiative back in 1995 but says she’s been involved in the caregiving business for almost 30 years.

“We look mainly after old and destitute people, and children who are abused, neglected, orphaned or HIV-positive.”

Mama Shirley started off by caring for the elderly, with no facilities except for a hospital – today her home comprises a fully equipped bakery that supplies the surrounding communities with a variety of goods and caters for special events, a laundry, a sewing centre that can produce almost anything, a crèche, nursery school, preschool and aftercare, and the old-age home.

Ebenezer might be humble in appearance but the premises are spotless – there are piles of building material around, thanks to Mama Shirley’s husband who likes to get stuck in here and there, but there is no litter to be seen anywhere. Everyone who lives there has a role to play, and they carry it out with pride.

Before the laundry was built, washing for 140 people was all done in tubs. Now there are industrial washing machines going all day long and a carefully worked out schedule.

Since Clover got involved with Ebenezer in 2006, they have helped to establish the bakery, a food garden and a phone shop with five public lines, and facilitated training in cooking, baking, sewing, health information, first aid, administration, basic financial management, art, and computers.

Looking after the helpless

Mama Shirley grew up in an orphanage and is one of those remarkable people who will always put the needs of others before her own.

“We have 59 elderly, among whom are a few psychiatric patients as well as blind people, and 66 children that live on the premises,” says Mama Shirley. “The preschool also takes children from the surrounding communities, and we have 30 pupils in aftercare.”

The teachers are properly trained, she adds, and are able to meet the needs of the children with regard to physical, emotional, cognitive and social development.

“One of the girls who grew up in my orphanage is now the head teacher – many of the people who live here don’t have any other place to go, but Ebenezer has given them a chance to get their self-respect back.”

The frail get the best care possible, but there are no freeloaders among the capable. “If you don’t work, you don’t stay here,” Mama Shirley says emphatically. Ray lives in the old-age home – he used to work in a bank but lost everything, and now he helps with the children’s education and homework. Ouma Poppie is 95 and discarded by her family. Like the others, their care includes regular trips to the hospital and on-site basic medical treatment.

The bakery is the main income generator. It’s run by Margaret and Miekie, two long-serving members of the home, who have passed their skills on to dozens of people. To keep up with the unceasing demand, there is a night shift. The home also earns an income from the sewing centre and its manager Leaza, who does alterations and produces aprons, children’s and adults’ clothes, and matric dance dresses at a fraction of a boutique’s cost – “but if the kids can’t afford it we allow them to work at the home in exchange for an outfit.”

Ebenezer sits in the middle of a number of informal settlements. However, Mama Shirley has no fear of crime – “The people know that we look after them, so they look after us in turn.”

Children are the main focus

“Kids are the focus of Clover Mama Africa,” says project founder and leader, the energetic Prof Elain Vlok. “Our mamas are all women taking care of children and the elderly – our society’s most vulnerable.”

In the nine years since the project’s inception, it has grown from an initial four women and 1 500 children, to 36 women taking care of 14 000 children and 2 500 elderly people – and is driven by a team of just three dedicated women.

She started the award-winning project in 2004 and it’s now Clover’s flagship CSI initiative, with the goal of equipping caregivers with skills that they can use to empower themselves and others.

Clover Mama Afrika takes the traditional notion of communities looking after each other – which is how it has been for hundreds of years – and builds it into an inspirational project that supports, educates and trains women so that they are better able to care for the people in their charge, and earn a living as well.

“You can find a woman like that in every community,” says Vlok. And Clover Mamas hail from Ashbury to Alexandra, Mossel Bay to Muldersdrift, Soweto to Somerset West, and Upington to Umlazi.

These are women who have established their caregiving operations over several years, but are now looking to become self-sustainable. Just having a dream is not enough to become a mama, says Vlok – there must be tangible results and evidence of hard work.

“That’s how we started the project,” says Vlok, “looking for those special women in communities. We spend a lot of time scouring the country for mamas. We have a huge system where our area managers spread the word that Clover is looking for a mama. They know what we’re looking for and they send out the sales force, who keep their ears to the ground.”

Prospective mamas are carefully evaluated, and the team pays a visit to the premises to make sure the applicant meets the requirements.

Vlok has made it her business to personally know all the mamas and their individual circumstances – she sees the project as an investment for Clover, and to her it’s more than just handing over a cheque and then letting the project trundle along on its own.

“I need to be there to keep an eye on the condition of sewing machines, the cleanliness of ovens, etc.” She is involved in training too, and runs quilting courses.

Successful applicants are allowed to choose their own skill path – “We don’t tell our mamas what to do. But it must be something in which they know they can become self-sustainable.”

In total around 2 000 individuals have been trained, who in turn have trained 4 000 people in their respective communities.

“We are managing 252 self-help projects and of those, 174 are creating an income. Almost 500 people are permanently employed through these projects, but we’re working hard to get that number even higher.”

“There are 30 blue chip companies involved. We receive a lot of goodwill from our partners, in addition to goods. Some of them have even adopted a mama.”

For instance, partners help with basic and advanced cooking and baking courses as well as starter kits of kitchen appliances and bigger items of equipment; bread baking courses where the mama receives a mini gas-powered bakery and ingredients for 100 loaves; sewing courses which impart skills and knowledge to make t-shirts, tracksuits or evening dresses; gardening skills, which enables the mama to start up a community vegetable garden; and hairdressing, of which there are now three successful enterprises and another starting up soon.

Clover also provides added value skills such as selling airtime for extra income, beadwork, knitting, pottery, and art. The impact is enormous – on the sewing side, 101 women have been trained in sewing, overlocking and embroidery techniques, and these in turn have trained 640 other people and set up 29 sewing centres, while 93 people at the centres receive a monthly salary. Items are available in the online store, although, Vlok stresses, the mamas are not yet at the stage where they can supply in bulk.

An important factor in the success story, says Vlok, is the quality of the training facilitators – only the best are selected. “That mama must not only learn the skills herself, but must go home and transfer them to others, so the last thing we want is a mediocre trainer.”

The project is a registered trust that’s independently audited by Ernst & Young – this is important also for the peace of mind of donors.

Despite challenges such as the perception among community members that the mamas are wealthy and are being bankrolled by Clover, mamas borrowing land for their enterprise – often to their disadvantage because once the property has been upgraded the owner will move back in and evict the mama – a lack of space, and trained staff getting employment and better pay elsewhere, the project continues to grow.

“These challenges merely help us to stay focused and keep on going,” says Vlok. “We believe we are contributing towards a better future generation.”