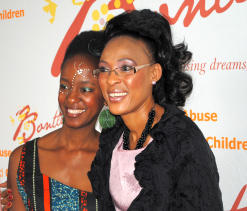 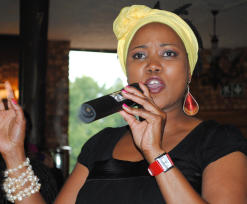 Lesego Motsepe spoke out vigorously against stigmatisation towards people who are HIV-positive.
(Images: Alaina Erasmus) 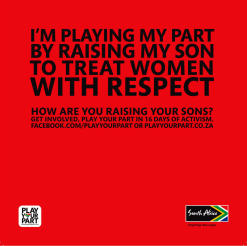 The attitude of boys towards girls is key to the way they will treat women later in life, but it’s important to educate them at an early age.

Events have taken place all around the country during the 16 Days of Activism against Abuse of Women and Children – one of them saw celebrities and supporters come together in Pretoria to share stories of pain and inspiration.

Popular actress Lesego Motsepe of Isidingo fame, Mbuyiselo Botha of the Sonke Gender Justice Network, Hawks spokesperson McIntosh Polela and Nhlanhla Mokoena, the executive director of the local chapter of People Opposing Women Abuse (Powa) were a few of the speakers at the brunch, which was organised by NGO Bontlebame.

“Bontlebame is a Setswana word meaning ‘my core beauty’”, said the organisation’s founder Kea Modise-Moloto. “Our organisation refuses to accept that which is ugly – rape, beatings, children going to bed without food, or having no access to education.”

Bontlebame works to provide disadvantaged women and children with the vision to see beyond their situation, and to know where to turn when they decide the time has come to make a change.

The event also raised funds for organisations that work with abused women and children, through tickets sold. The main beneficiaries were Powa and the Motheo Wa Katlego community project, which cares for vulnerable children in Winterveldt, northwest of Pretoria.

From despair to hope

Polela, who found out years later that his abusive father had also killed his mother, told his story in the harrowing but inspiring My Father My Monster.

“A man who abuses a woman or child has no peace,” he said. “When I met my father, years later, I met a man who was empty despite his wealth and standing in the community. When your family cries, there is no happiness in your life.”

Polela thanked the women who took him out of his situation, counselled him and helped him to move on.

Asked what kept him going through the darkest of times, he replied that he thought about the future and gave himself hope by mentally running away from his situation.

Dudu Mvimbi-Leshabane, editor of Real magazine, shared a secret for many years with her aunt and uncle, with whom she lived – her uncle used to beat her aunt.

“I was a child so I felt I couldn’t do anything – I didn’t know that I could tell other people, so for years it was a dark secret between the three of us. But silence empowers the abuser.”

Today the magazine encourages women to share their stories, so that through them other women may be inspired.

Abuse doesn’t have to be physical, said Modise-Moloto. “It is not necessarily the raising of a hand, but can be emotional, financial, verbal or sexual.”

The charismatic Botha tried to give the audience insight into some of the reasons that could drive men to abuse women.

“Men in our society are brought up to believe that they have the responsibility to support the family. If they can’t, they feel helpless. If men feel disempowered, for instance at work, they can assert themselves at home, often with tragic consequences.”

He added that in today’s society there are many men who grew up without a positive male role model in their lives – this makes a huge difference.

“We must invest in crèches and primary schools,” he said, “and teach our boys that violence is not the norm.”

Men must speak out and condemn abuse, said Mokoena. She suggested that good men in communities take a stand by mentoring families where there is no father – not necessarily financially, but by setting a positive example for boys to follow.

“Young boys are showing disrespect towards girls at school level already, and my question is, how are they being raised? We need positive role models for boys and girls alike.”

She explained that Powa was established in 1979 and, years later, is still fighting the same fight. There’s no easy answer, said Mokoena, but one useful strategy is to instil a sense of equality in boys and girls, so that boys will show respect and girls will have self-confidence.

Help is available for victims of abuse, she insisted, with many organisations standing by to reach out a hand, but only if the victim has the courage to come forward and take it. The turning point comes when the silence is broken.

“Some women kill themselves because they feel there is no way out,” said Mokoena, “and the abuser gets away with it because he doesn’t have a face – he may even be well-respected in the community.”

Powa uses various avenues to spread its message, such as the popular soapie Generations, and an annual anthology of stories written by abused women, which is used as an educational tool and is distributed to school libraries.

Keneilwe Mokgoko, the survivor of a near-fatal car accident, spoke of the months she spent in hospital and how she used pain as a motivating factor. Mokgoko has also shared her experience in A Time to Heal, which is available as an ebook for Kindle.

She encouraged everyone present to donate blood and to support the work of the South African National Blood Service.

The event coincided with World Aids Day, and Lesego Motsepe, who played Lettie Mashabane for 10 years on long-running soapie Isidingo, shared with the audience her experiences in the year since she revealed that she was HIV-positive.

Motsepe, who has lived with the disease for 13 years, is particularly motivated to challenge the stigma that comes with being HIV-positive, which prevails despite the many campaigns and awareness programmes aimed at educating the public. People close to her turned away when she came out with her status on 30 November 2011, and she feels that she can make a difference in the lives of others, having gone through that rejection.

“If we don’t talk, we perpetuate the situation,” she said. “We need to take positive action and stand together, and then we will overcome HIV. Remember also that if you don’t have HIV, it doesn’t mean you are better than someone who is HIV-positive.”

The event closed with a fiery presentation on confidence by corporate star Lillian Barnard, who forged a successful 15-year career with IBM, including a seven-year stint in Switzerland and France. She now runs a business consultancy in Johannesburg, with a special focus on women.

“Women are empowered, we have access to money, we can be educated – but things are still not equal,” she said. “The difference is when you have confidence in yourself, because then you are in control. Other people can’t be your only source of confidence.”