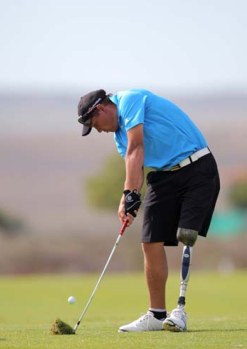 Young golfing champion Daniël Slabbert, an amputee, is living proof that adversity is no match for determination and a belief in one’s own talents.

At just 21 years old, Slabbert is already a veteran of the golf course and a championship winner, and even with a prosthetic leg, he is capable of just about anything.

While he also holds a successful reputation as a golfer, these days Slabbert is working towards his PGA (Professional Golfers Association) diploma at the University of Pretoria. Currently he holds the title of the Nedbank SA Disabled Golf Champion, a title he first won in 2011.

That victory put him on the map in the golfing world, and this year, he successfully defended his title at the Langebaan Country Estate in the Western Cape. However, the success and recognition Slabbert has achieved in golf is a result of his determination to overcome the obstacles he faced as a young boy.

Slabbert, who grew up in the Northern Cape province, was just 14 years old when an accident on his parents’ farm near Kathu caused a severe injury to his leg.

“I was jumping on a trampoline alongside the farm house,” he says. “I landed slightly off balance, and it shot me towards this small window. My left leg went through the window, and that was it.”

Every major artery and tendon above his knee was severed. Slabbert was rushed to the Kathu hospital, which didn’t have enough blood for him. The heavily bleeding teenager was bundled into an ambulance and rushed to Kuruman about 60km away.

Medics managed to perform the transfusion in time, and then transferred him to Kimberley where he spent, amazingly, only six days in the hospital following an amputation through his left knee, after doctors were unable to repair the damage.

After the amputation, the wound to the young man’s leg took a few months to heal and his rehabilitation started.

Slabbert was fitted with a prosthetic leg and started his road to recovery, all the while refusing to let go of his dream to play the world-renowned Gary Player Country Club course during the week of the Nedbank Golf Challenge, held annually at Sun City in the North West province.

Making each day a personal victory

The spirited young man stayed positive despite the debilitating accident, and pressed on, making each day a personal victory.

Three months after the accident, he was back on the family farm and walking again with his new prosthetic. And just six years later, Slabbert is one of the brightest stars in South African disabled golf.

Before the accident, he was a keen golfer, having inherited his aptitude for the sport from his father. He continued playing after losing his leg, garnering a reputation as a brilliant young golfer. Slabbert also took part in several tournaments for the South African Disabled Golf Association.

“At one of these tournaments, I experienced difficulty in walking comfortably,” he says.

Slabbert was put in touch with Marco du Plooy, a prosthetist from Pretoria.

“I was impressed with the way he built prosthetic limbs,” says Slabbert. “Marco was very accommodating and attentive in his approach and he understands that a great prosthetic leg is reliant upon a great foot, knee and socket – the part where the remaining part of the amputated leg fits into the prosthetic leg.

“The sockets Marco builds are a cut above the rest and he has been making my legs ever since,” he explains. “I am very fortunate to have the best leg prosthetic technology is capable of creating. It helps me to do my best on the golf course.”

Slabbert says with much conviction that he is not planning to slow down at all and advises those in similar circumstances that persistence and a positive attitude makes anything possible.