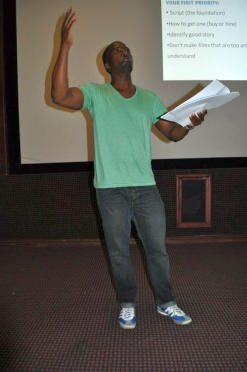 Director and actor Tony Kgoroge at one of the NFVF’s film workshops held in 2011. 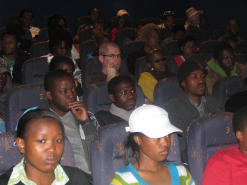 Film students listen to a speaker at a workshop hosted by the NFVF in 2011.
(Images: www.nfvf.co.za)

Organisers of the Mangaung African Cultural Festival (Macufe) Film Week are expecting a large turnout in 2012, after the success of last year’s event.

A project that grew out of a partnership between Macufe and the National Film and Video Foundation (NFVF), the second film week will run from 10am to 6pm between 9 and 13 October at the Muse Theatre, a venue at the of the Performing Arts Centre of the Free State.

According to NFVF communications manager Naomi Mokhele, the 2011 event encouraged a number of film enthusiasts to enter the industry at various levels.

“The first year was indeed a success,” said Mokhele. “We’ve seen participants from 2011 entering the film industry and being eager to grow.”

While the 2011 event featured straightforward workshops where industry experts spoke to participants on various topics, a new element will be introduced into this year’s programme to encourage audience participation.

Macufe started on 5 October and will end on the 14th. It features a variety of activities from music to theatre, comedy, art exhibitions and a crafts market.

Mokhele said participants in the screenwriting workshop will be required to write their own scripts. These will be entered into a competition and the writer of the best script, as determined by the facilitating experts, will win a prize.

“Adding an interactive element to the experience helps us measure the level of understanding from our participants,” explained Mokhele.

The other two workshops on offer will give participants an opportunity to learn about directing films and how to go about forging a career in the industry.

The event, said Mokhele, was also a great way for communities in the Free State, which has hosted the festival for the past 15 years, to get exposure to the film industry. “It fulfils the NFVF mandate of ensuring the growth of film in disadvantaged areas.”

One of South Africa’s well-known directors, Akin Omotoso, whose latest film Man on Ground won several international awards, will run the directing workshop. He’ll be joined by Jerry Tsie, former actor and director of The Barefooted Comrade – a documentary about young anti-apartheid activist Sipho Mutsi who died while in police custody in the Free State. Both directors’ works will be showcased during the event.

Actress and producer Rosie Motene, together with Isaac Mogajane, producer of Blitz Patrollie, and television and film actor Wandile Molebatsi will speak on the various careers available in the industry.

It will not only be hard work for the film enthusiasts though, as the NFVF will also screen a selection of homegrown films, one on each day of the event. The films have all received support, in one form or another, from the foundation.

Entrance to the screenings and workshops is free, and Mokhele said this was to encourage a culture of supporting local productions and getting to learn more about the local industry.

“The foundation is always available to assist with information on training programmes that we offer,” she said. “Besides the Macufe film week, the NFVF goes around the country, entertaining and educating the public about the film industry.”

Mokhele explained that the foundation’s efforts include empowering young people and ensuring that they achieve the necessary skills to pursue careers in film, should they be interested.

“Apart from a physical presence at various film festivals and offering support to local filmmakers, the NFVF offers programmes and information to assist with a career in film,” she said.

The annual festival is one of the priority projects of the Free State government’s sport, arts, culture and recreation department.

It is not only aimed at local arts and entertainment enthusiasts, but with previous line-ups featuring international artists, the event has grown to attract people from beyond the country’s borders and even abroad.

Some of the country’s top comedians will also entertain audiences, while several poetry sessions will also feature.

A highlight for sports fans is the Macufe Cup, a soccer match usually played on the last day of the festival. This year Johannesburg-based Kaizer Chiefs will go head to head with local outfit Bloemfontein Celtic.