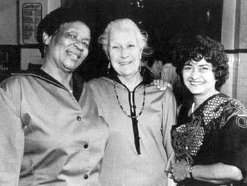 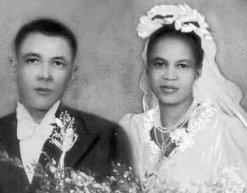 The Sisulus on their wedding day in 1944.
(Images: SA History Online) 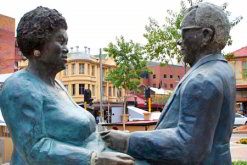 Albertina and Walter Sisulu, cast in
cement in Johannesburg’s CBD. The
sculpture stands in Diagonal Street,
opposite the building which was once home
to his offices. The artist is Marina Walsh.
(Image: Johannesburg Development
Agency)

Just weeks after casting her vote in the local government elections, struggle veteran Nontsikelelo Albertina Sisulu has passed away, aged 92.

The widow of former African National Congress (ANC) deputy president Walter Sisulu died on 2 June at her home in Linden, Johannesburg. According to news reports, she suddenly fell ill, coughing blood, and paramedics who rushed to the scene were unable to revive her.

Her family expressed their sorrow at her death, but said that it comforted them to know that she and her beloved husband of 59 years were no doubt together again.

Like former president Nelson Mandela, the elderly widow cast a special vote at her home the day before the country turned out to vote for their local municipal representatives. According to the ANC’s Gauteng spokesperson Dumisani Ntuli, she was in high spirits and hoping that her vote would inspire others to support the ruling party.

Ntuli added that election day, 18 May, was especially meaningful to MaSisulu, as she was fondly known, because it was her late husband’s birthday.

President Jacob Zuma honoured the late activist – the longest-serving ANC member – saying that she was one of the mothers of the nation and had inspired the liberation movement.

“She reared, counselled, nursed and educated most of the leaders and founders of the democratic South Africa,” said Zuma.

“While we mourn her loss, we must thank her most profoundly for the selfless service to all South Africans and humanity at large, for her generosity of spirit and for teaching the nation humility, respect for human dignity and compassion for the weak, the poor and the downtrodden.”

On behalf of South Africa’s government and citizens, Zuma sent his condolences to the family.

Mosiuoa Lekota, president of the Congress of the People, said that she played a critical role in the struggle during the 1980s, and that she was a “guiding light”.

ANC spokesperson Brian Sokutu said: “She fought to improve the lives of our people and she served the country with distinction. We pay tribute to this selfless leader and mother of the movement.”

The Sisulus – a lawyer and a nurse – married in 1944 at a ceremony in which Mandela was the best man. The couple had five children and adopted four others.

Although MaSisulu had no interest in the political struggle when she married, it wasn’t long before she was fighting at her husband’s side, working to bring apartheid to an end and see in a new democratic government. Like him, and many others, she endured imprisonment, banning and exile.

She was instrumental in the 1955 launch of the Freedom Charter, and took part in the historic march on the Union Buildings, the seat of South Africa’s government, by 20 000 women in 1956 in protest against the oppressive pass laws.

She became national co-president of the liberal United Democratic Front at its inception in 1983, and held the position until the party disbanded in 1991. Later she joined the ANC Women’s League and was elected deputy president, and in 1994 she became a member of Parliament before retiring in 1998.

Several of the Sisulu children have themselves become leaders in the democratic South Africa. Max Sisulu is the speaker in the National Assembly; Beryl Sisulu is South Africa’s ambassador in Norway; Lindiwe Sisulu is the minister of defence; Zwelakhe Sisulu is a prominent businessman; and daughter-in-law Elinor Sisulu, married to Max, is a well-known author and human rights activist.