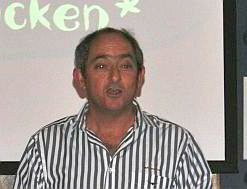 Robert Brozin, the founder and CEO of
Nandos, made a presentation to the
delegation.
(Image: Lynley Main)

A group of international journalists recently visited Gauteng as part of a promotional tour for the Brand South Africa campaign. The efficient public transport system and sampling delicious local fare were among the tour group’s highlights.

The nine-day junket, called the South Africa Gearing for Growth Media Tour, is being led by Brand South Africa. It kicked off on 28 November and will come to an end on 5 December 2010.

The tour will also stop in Durban, KwaZulu-Natal province; Pilanesburg in North West and Secunda in Mpumalanga.

Deputy Minister in the Presidency Dina Pule welcomed the journalists to the country on the evening before the Gauteng leg of the tour.

“I am pleased to officially welcome you to our beautiful country, South Africa, which is alive with possibilities,” she said.

“We have brought you here to feel and experience what South Africa has to offer and to witness how we are gearing up for growth. We also want you to experience our diverse infrastructure and institutional excellence. Most importantly, we brought you to help us tell a uniquely South African story to the world.”

The journalists are from Brazil, the Netherlands, UK, China, Kenya, Egypt, Nigeria and Russia.

“It is our hope that through this tour we can show why South Africa deserves to be rated among the world’s most dynamic emerging markets,” said Miller Matola, CEO of Brand South Africa.

“It is our hope that at the end of the tour, the first-hand experience of our country will provide journalists with a seamless understanding of South Africa on the move,” the IMC said.

Sights and sounds of Gauteng

The Gauteng excursion began on the morning of 29 November with a trip to the Competition Commission in Pretoria. Once there, the journalists were given an extensive presentation on how the organisation operates.

The Competition Commission is responsible for rooting out restrictive business practices in South Africa to ensure a healthy and efficient economy.

The delegation then went to Johannesburg to board a Rea Vaya bus for a tour of the city.

One of the guests, Enoch Wambua, a sub-editor for a Sunday newspaper in Kenya, said: “It took us approximately 35 minutes to go from Johannesburg town, to Soccer City and back to town on the Rea Vaya. We were reassured of its convenience and efficiency.”

Rea Vaya is the name of Gauteng’s Bus Rapid Transit system, which is aimed at making transport in the city more reliable, convenient and affordable. Buses run along dedicated routes to ensure a speedy service. The enclosed stations along the route are spacious and welcoming.

The system does not operate in a vacuum – it is a significant part of a city-wide plan to ensure a seamless public transport network combining regular buses, rail, taxis and private vehicles.

After the Rea Vaya tour, delegates were treated to lunch from South Africa’s most famous chicken outlet, Nandos.

The journalists dined at the chain’s head office in Bertrams – near the Johannesburg Stadium – where they met Nandos founder, Robert Brozin. They were also taken through the brand’s quirky marketing campaign, which has become known for its unique social commentary and satire.

James Lawrence, a British freelance journalist, said: “Coming from the UK one thing I have already fallen in love with is the weather. I also thought when people spoke about Soweto I would find run-down buildings with no amenities and poverty but I was surprised to find a vibrant nucleus of life.”

Stopping off at Park Station

A tour of Johannesburg’s Park Station in the CBD was next on the itinerary. This station is a transport hub where trains, long-distance buses and taxis meet and depart.

The group were shown where to enter the station, where to buy a ticket and where to board a train. They were also shown where they could report bad service by station personnel.

It is also the terminus of Shosholoza Meyl long-distance services to Cape Town, Durban, Port Elizabeth, East London, Bloemfontein via Kimberley, Komatipoort via Nelspruit and Musina via Polokwane.

The station will soon accommodate the Gautrain as well.

Launched on 8 June 2010, the Gautrain is a state-of-the-art rapid rail network in Gauteng that will provide a link between Pretoria and Johannesburg and a link between OR Tambo International Airport and Sandton. The latter is currently operational, and the Pretoria link will come on stream soon.

Travelling at a maximum speed of between 160 to 180km/h, it will take passengers from Pretoria to Johannesburg, or vice versa, in less than 40 minutes.