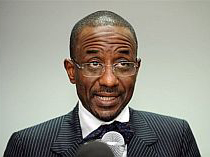 Mallam Lamido Aminu Sanusi has revolutionised the Nigerian banking sector since taking over as governor of the Central Bank of Nigeria in 2009.
(Image: Allvoices)

Revolutionising Nigeria’s troubled financial sector has won Mallam Lamido Aminu Sanusi the title of Central Bank Governor of 2010 for Africa and the world.

The award, which recognises bankers worldwide who have masterminded recoveries from financial crises, is presented by The Banker – a high-profile magazine for the banking industry.

Since becoming governor of the Central Bank of Nigeria in 2009, Sanusi has introduced radical changes, including limiting the tenure of bank bosses to a maximum of 10 years, regardless of their impact.

He has also rooted out corruption by pushing for guilty parties in the sector to be criminally charged.

Such bold intervention has earned the banker the nickname “Sanusi Tsunami”.

In February 2010 Sanusi announced that Nigeria’s reformed financial sector should be based on four key principles: enhancing the quality of the banks; establishing financial stability in the country; enabling a healthy financial sector evolution; and ensuring that the financial sector contributes to the real economy.

Brian Caplen, editor of The Banker, said: “Few candidate names generate an overall consensus on judging panels and yet, when it came to finding the best global central bank governor of the year, Mr Sanusi was chosen unanimously.”

Kunle Ogedengbe, the magazine’s representative in Nigeria, added: “The reforms initiated by Mr Sanusi have been necessary to sanitise the banking industry. Had these reforms not been initiated, Nigeria would have entered into another round of banking distress.”

Sanusi was born on 31 July 1961 and graduated from King’s College in Lagos in 1977. Four years later he obtained a BSc in economics at Ahmadu Bello University. He went on to get a masters in economics in 1983 at the same university before becoming an economics lecturer there from 1983 until 1985.

Sanusi broke into the industry that same year by joining merchant bankers Icon Limited. In 1997 he joined the United Bank for Africa in the credit and risk management division, rising to the position of general manager.

The year 2005 saw him joining the board of directors of the First Bank of Nigeria as an executive director in charge of risk and management control.

After being appointed Central Bank governor 1 June 2009, Sanusi facilitated the 400-billion naira (US$ 2.6-billion) bailout of Nigeria’s Afribank, Intercontinental Bank, Union Bank, Oceanic Bank and Finbank, and then dismissed most of those institutions’ chief executives.

“We had to move in to send a strong signal that such recklessness on the part of bank executives will no longer be tolerated,” he said at the time.

Sanusi also has a keen interest in Sharia law and obtained a degree in Sharia and Islamic Studies in 1997 from the African International University in Khartoum, Sudan.

In-depth coverage of the banking industry

The Banker magazine was established in 1926 as a mouthpiece for the financial and banking industry. Today it’s sold in 150 countries throughout the world.

The awards it issues include Deals of the Year; Innovation in Technology; Investment Banking; Private Banking; and Bank of the Year.

Editor Brian Caplen has been at the helm since 2003. He is an accomplished journalist with many high-profile interviews to his name. He’s a former executive editor of the magazine Euromoney and has worked as a business editor and journalist in Hong Kong and the Middle East for 10 years.