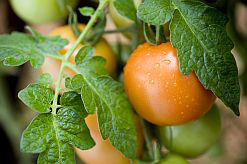 Farming for the future will ensure that
Woolworths suppliers grow quality
produce while minimising the negative
impact on the environment.
(Image: Woolworths)

South African retailer Woolworths – which specialises in upmarket clothes and food – has pioneered a new, cost-effective farming method to improve the quality of its fresh produce while protecting the environment.

The initiative, known as Farming for the future, “is a significant paradigm shift and a giant leap forward on how we farm fresh produce in South Africa”, Woolworths CEO Simon Susman said at the launch in Johannesburg on 3 November 2009.

“In my view, Farming for the future will help to secure the sustainability of South Africa’s soils, water resources and productive capacity in the long term.”

Several years ago Woolworths realised that the conventional farming methods used by its suppliers were unsustainable as they were “depleting the soil’s capacity to produce quality fruit and vegetables as its carbon and biodiversity content shrunk,” said Susman.

To rectify this, the retailer called in its agricultural experts to work hand-in-hand with suppliers and, over three years, an alternative production method was developed. Initial trials showed that as yields and quality became more consistent, less water and fewer inputs were needed.

Farming for the future techniques are now being implemented at all Woolworths supplier farms around the country, with 50% of the chain’s fresh produce already being grown this way. The method, Susman explains, is “somewhere between organic farming and current, conventional farming practices”.

The retailer wants all its locally grown fruit and vegetables to be farmed organically, or through the Farming for the future approach by 2012. This is a significant undertaking as it accounts for more than 90% of its fresh produce.

The good news for consumers is that the new method costs no more than conventional farming, so prices won’t be affected. Farming for the future fresh produce will be packaged with a special logo and will be available in Woolworths stores later in November.

Farming for the future concentrates on composting and increasing soil’s humus content, enabling it to absorb more carbon dioxide. “It re-establishes the soil as one of the key carbon sinks, so we’re taking carbon dioxide out of the air and putting it back in the soil,” Susman said.

With more use of organic fertilisers, farmers will be less reliant on chemical products that deplete the soil. The health of farmworkers will also improve as there will be less exposure to harmful pesticides and herbicides.

Flip Nel is a farmer from Limpopo province with 26 years of experience. He converted to Farming for the future methods after being impressed with them in a trial and now supplies Woolworths with a range of fresh produce, including baby cucumbers and tomatoes.

Six years ago Nel realised that the soil on his farm was losing quality. He said he had to find an alternative production method as “we couldn’t get the same yields and returns on our inputs”.

Conventional practices, cultivation, fertilisation and chemical pest control worked against nature, said Nel, but “Farming for the future is an attempt to turn that around”.

The farmer has also noticed that his land’s biodiversity has improved since switching methods.

In addition to helping its main suppliers adopt Farming for the future techniques, Woolworths is working with upcoming, small-scale farmers in Limpopo and KwaZulu-Natal so they can become suppliers as well.

“They [small-scale farmers] are really improving the quality of their produce faster than we imagined … it may not be long before they supply the bigger markets,” said the chain’s soil scientist Kobus Pienaar.

“But we also want them to be able to supply their communities and so far they have been successful in that.”

Farming for the future could change the nature of production across South Africa and others are welcome to adopt it, said Woolworths head of food Julian Novak.

The initiative is also supported by the South African arm of the World Wide Fund for Nature (WWF). Mark Botha, head of Living Lands at WWF, said in a statement: “Maintaining ecosystem integrity is a major challenge facing South African farmers. This includes issues of soil health, over-allocated and degraded water resources and biodiversity destruction.”

“As key players in the food value chain, retailers and their suppliers can make a meaningful contribution to accelerating the adoption of better management practices in agriculture. We commend Woolworths for taking the lead in driving positive change in this competitive sector,” he added.