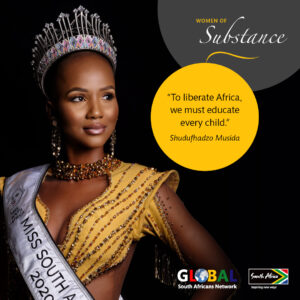 Every August 9th, South Africa commemorates a significant era in the country’s political journey, a historic day, 65 years ago, when 20 000 women  marched to the Union Buildings, in Pretoria to petition the apartheid government against pass laws that segregated and  limited the movement of black people in urban areas. The significance of that march is, to this day, a moment of reflection, where the country looks back and acknowledges their courageous efforts, in commemorating of one of South Africa’s most powerful moments in our history. An illustration of the powerful and influence of South African women in society.

“Women continue to make waves in all spaces that they occupy. As we come to the end of Women’s Month, Brand South Africa recognises the positive impact of three South African women through a campaign called “Celebrating Women of Substance”. The campaign puts the spotlight on, Dr Sophie De Bruyn, the last living leader and member of that fateful march of 1956; the reigning Miss South Africa and Play Your Part Ambassador, Shudufhadzo Musida; and creative artist, Mmabatho Montsho. These trailblazers are doing remarkable work in the upliftment of women in various fields. With this, we hope to reignite the passion and courageous actions of our women both at home and abroad, to play their part in showcasing who we are and fly the South African flag high,” says Jimmy Ranamane, Brand South Africa’s Acting General Manager: Global Markets.

Dr Sophie De Bruyn embodies the spirit of leading by example. Together with fellow liberation struggle stalwarts Lilian Ngoyi, Rahima Moosa, Helen Joseph and Albertina Sisulu who have all since passed away, Dr De Bruyn was at the forefront of that historic march. She has dedicated her life to the fight against oppression of marginalised groups and continues to advocate for women’s rights saying ‘We are mothers of both victims and perpetrators of violence. We bear the brunt of destruction and income through violence”. She encourages South Africans to continue to find ways to navigate the challenges that women face, especially concerning gender based violence.

Shudufhadzo Musida, a champion of mental healthcare, who launched an online mental health initiative #MindfulMondays, in association with the South African Depression and Anxiety Group (SADAG) and Discovery Vitality. In her recently published book ‘Shudu Finds Her Magic’  in partnership with the Miss South Africa organisation, Musida tells an inspiring tale of how she overcame her sadness and some of life’s difficulties, from childhood, being a teenage girl and becoming a woman who has learned to love herself. “Empowering the mind of a girl child using education as the tool, will help to build a society of empowered women who will pay it forward, break harmful cycles, and rebuild new and improved pathways to achieve holistic health and well-being,” says Musida.

Mmabatho Montsho is undoubtedly one of South Africa’s most talented creative artists. A storytelling genius, successful entrepreneur, fashion designer, filmmaker, screenwriter, and visual artist, Montsho is set to direct an international short film, ‘Desmond’s not here Anymore’. The film is based on the award-winning screenplay by Lindiwe Suttle Müller-Westernhagen. She too is flying the South African flag whilst working with Hollywood actors S. Epatha Merkerson and Yolonda Ross in the film.

It is evident that the three phenomenal women are not only women of substance but they are also pillars of the Nation Brand, and continue to shape the perceptions of the country on the international stage. It is in this regard that we call South African women and men to heed the call from our three heroines and play their part by becoming exemplary citizens and ambassadors of the country as they continue to work, live and travel abroad.