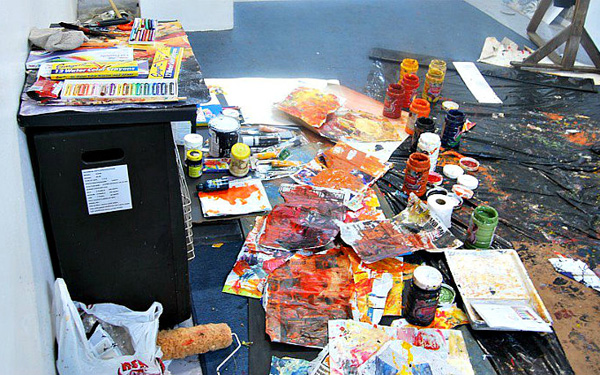 Tucked away in Fordsburg near the Oriental Plaza, in the west of the Johannesburg inner city, an unassuming warehouse has helped develop important South African artists for over two decades. Divided into 16 working studios, the Bag Factory continues to connect artists to the local and international art world with residency programmes and visiting foreign artists.

The organisation was co-founded in 1991 by artist, teacher and curator David Koloane and British art collector and philanthropist Robert Loder, who saw the need for a permanent space where artists could be nurtured, sharing both space and ideas. Artists who took up residence included such present-day luminaries as William Kentridge, Penny Siopis, Wayne Barker, Ricky Burnett, Deborah Bell, Pat Mautloa and Sam Nhlengethwa.

Mautloa and Nhlengethwa are still involved as members of the board, while Koloane is an honorary co-director. All three still work from their studios at the Bag Factory.

Built on the idea of open access, the Bag Factory has expanded and developed as a facilitator, educator and opportunity for cultural exchange, for both local and international artists. With its studios, residencies, exhibitions, educational workshops, curator programme and training opportunities for artists, and including community groups and the general public, it plays a key role in nurturing and promoting South African artists. 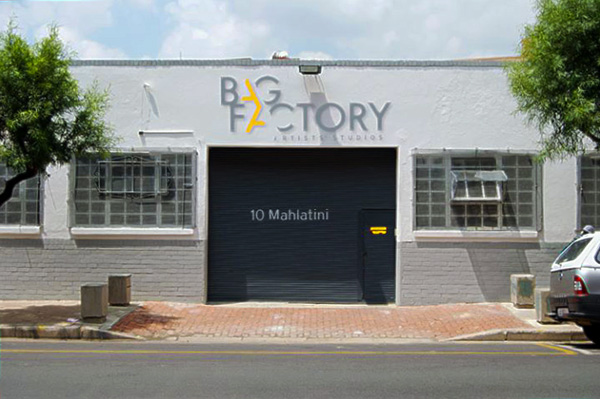 Sara Hallatt, who joined in 2011, is the director of the Bag Factory. Her deputy is James French, who has been with the organisation since 2001. French does everything from promoting and managing the artists in residence, to fundraising and answering the phone.

“We do not have a top-down management style here,” he says. “Every artist is their own boss. We are there to support them, alerting them to funders and helping them to make contacts. Our focus is on communication and the creative flow.”

The gallery is not commercial, French says. Instead, it is geared to exposing the artists’ work, although the work can also be sold directly to the public.

“Our three-month residency programme, started in 1996, is our flagship programme, where 12 artists come from around the world through the year, to create works, interact with the local art community, have exhibitions, and make contacts in the art world and experience Joburg’s diverse cultural environment. Apart from producing their own work, visiting artists engage with the local artists resident at the Bag Factory. At the end of their period of residency, they hold open studios and a public exhibition.”

The benefits, both here and abroad, are clear, “as international artists go back to their communities with a wealth of South African contacts and popularise South Africa’s art in their home countries”. 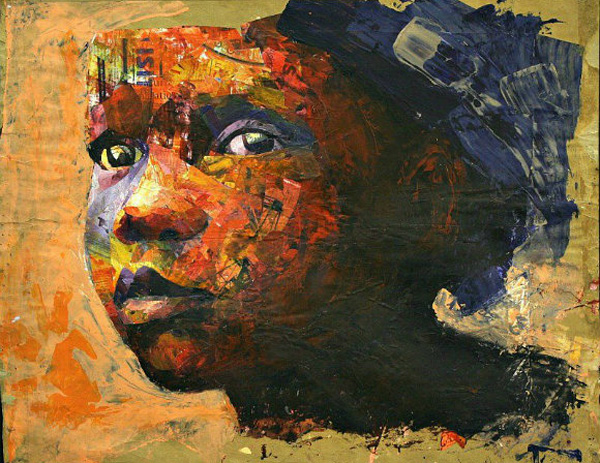 For artists who can pay their own way, an artists-in-residence self-funded programme provides self-catered accommodation and a studio for rent, along with support from the studio’s staff and artists. The Bag Factory also offers two awards. The Reinhold Cassirer Award funded by the late Nadine Gordimer and fine art auctioneers Strauss & Co, which offers an emerging artist under the age of 35, in the field of drawing or painting, the opportunity to spend about 10 weeks at the studios. The David Koloane Residency Award is an annual grant to an emerging South African visual artist, with preference given to artists from remote areas. The award winner receives an 11-week residency from January to March each year.

The current Reinhold Cassirer Award holder is Thato Nhlapo, whose work focuses on his home township of Ratanda.

Artists currently in residence demonstrate how the Bag Factory has given many unknown artists their big break. Benon Lutaaya from Uganda rents a studio and is now a successful artist in his own right. He is known for his powerful paper collage portraiture paintings – “recycling” his materials as a medium by creating giant collages out of pieces of paper on which he has previously mixed his paints – with themes that focus on isolation and the fragility of life.

“Back in Uganda, life was a struggle,” he says. “After attending university, I started collecting newspapers to make collages. I had no access to any kind of art or art materials.” His life changed after he heard about the Bag Factory, and he applied for the Reinhold Cassirer Award in 2011. He started to paint and sold his first work for R500. Three years later, Lutaaya commands R40 000 for a painting, and his work has been shown at a number of local and international exhibitions. 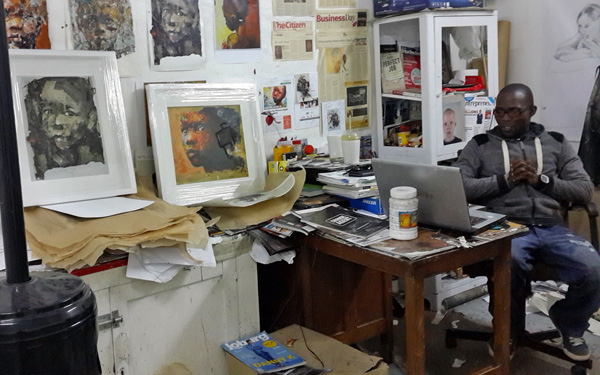 “Being at the Bag Factory has given me the space to learn and develop. The residence has helped me to get where I am today. And my success has allowed me to give back to those in need and to the Bag Factory.” He has donated over R200 000 to children’s NGOs and has started a trust for underprivileged children in Uganda.

Asanda Kupa, an artist from Molteno in Eastern Cape, won the Reinhold Cassirer Award in 2013 and now rents a studio. “You are under one roof with experienced artists,” Kupa says of the Bag Factory. “You realise you are on the map and are taken seriously and encouraged.” 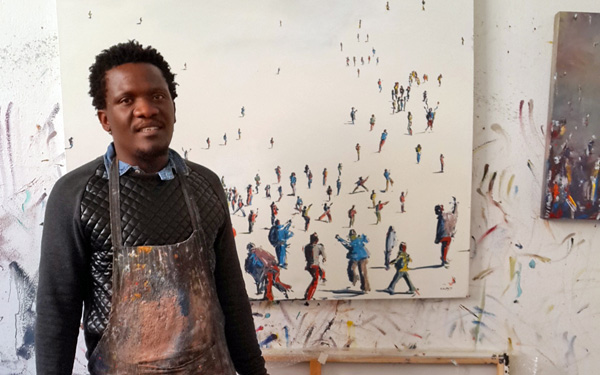 Diana Hyslop, who originally worked at the Johannesburg Art Foundation, has rented a studio at the Bag Factory for 10 years. “I have gone on some amazing residencies through the Bag Factory, to Uruguay, to France on the Camac residency programme,” she says. “And in 2012, there was an exchange programme between French and South African artists.”

Hyslop’s latest paintings are of food. “I wanted to focus on the food crisis in the world, and in contrast the obsession with dieting and being thin, and how the body looks, and the health fads that come and go.” 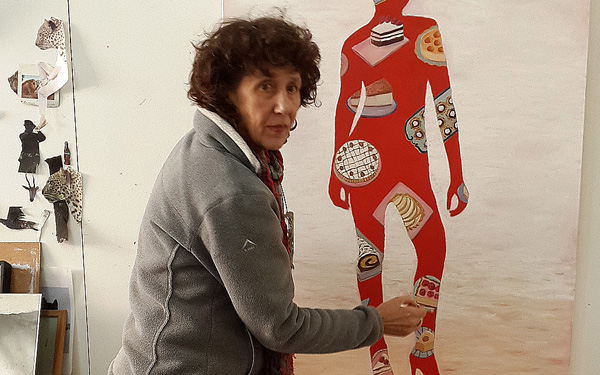 Pat Mautloa, who was originally involved in the Thupelo Workshops and is a member of the Bag Factory board, says that art was the unifying medium that brought artists who lived in separate worlds under apartheid to work together at Thupelo. “It was noble but temporary as the workshops were only two weeks long. Then everyone would return to the suburbs and the townships and stop painting.” 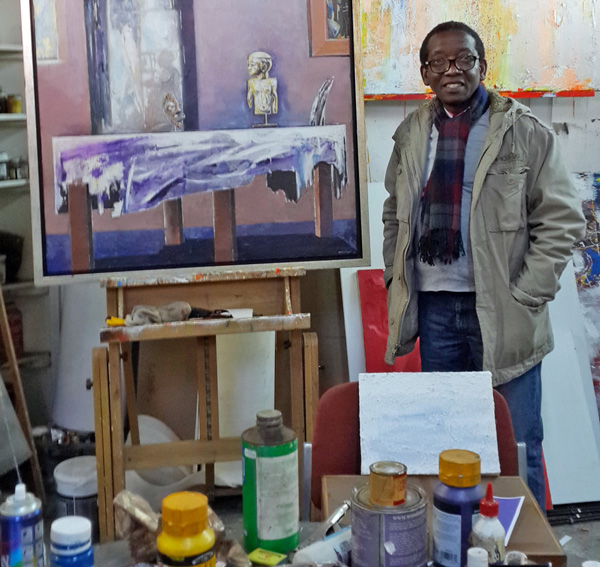 The Thupelo Workshops – “thupelo” is a Setswana/Sesotho word meaning “teach by example” – were founded in 1985, during the apartheid era, to allow black and white artists from around the country to work together in a venue outside the city. The workshops aimed to encourage artists to experiment with different materials and techniques, and to exchange ideas. They also encouraged a move away from the stereotypical “township art” style of painting.

“Then Robert Loder bought the building and a permanent studio was opened to artists of all races,” say Mautloa. “Now our artists in residence are ambassadors for South Africa, and they come from all over the globe.

“Studio artists are able to attend residencies overseas, such as in India, Cuba and the rest of Africa. They’ve been invited to exhibit at international biennales. Young artists who have won the Reinhold Cassirer Award and the David Koloane Mentorship, their careers have really taken off. The Bag Factory is sustaining the culture of the country.”

He is currently working a series of paintings on the different views from the Bag Factory studios, showing the mosque and Fordsburg’s old shops. “I am documenting Joburg. It’s a forever changing city; but these paintings [of its views] will last forever.”

Blessing Ngobeni applied for and won the Reinhold Cassirer Award in 2012 and now rents a studio at the complex. His career has blossomed since winning the award and he feels that this experience has benefitted him both “artistically and personally”. “My works are now being recognised around the world. Art collectors know my work. All the media recognition I’ve got has stemmed from winning this award. I now have an upcoming residency in San Francisco.” 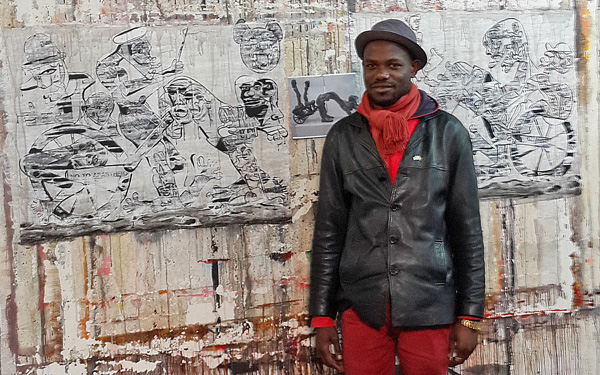 Ngobeni is working on a series called Dialogue with the Masters for an exhibition to be held from 22 to 24 August at the Sandton Convention Centre. Ten contemporary artists have been invited to engage with influential works of South African masters to celebrate 20 years of democracy. Artist Dumile Feni, who went into exile in the United States, where he died in 1991, is Ngobeni’s choice.

“Dumile Feni was free as an artist even though he was oppressed. To engage visually with Feni, I looked at how he was neglected, how he was isolated and ended up a damaged person. He was in exile and then he died. But now he is alive again through this work.”

Artist Gail Behrmann studied fine art under Bill Ainslie at the Johannesburg Art Foundation in the 1970s. An artist and filmmaker, Behrmann has rented a studio at the complex for three years. “The Bag Factory allows for interaction between artists, sharing techniques and help when needed. Having individual studios also allows for the necessary privacy to create. The office administration is excellent, which leaves artists to do what they do best – make art,” she says. Her abstract images “explore positive and negative space”.

Thonton Kabeya, from Democratic Republic of the Congo, uses burnt walnut shells made into a paste as his medium. About his painting Made in China, which features rows of shoes coated in acrylic paint and coloured with the walnut paste, he says: “I am interested in what life in Africa will be like 100 years from now and how the cheap influx of goods from China affects our continent.” 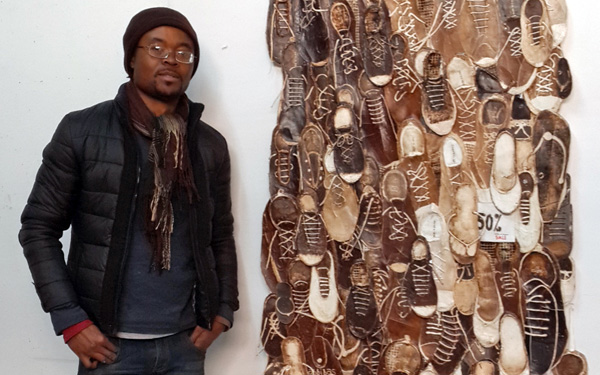 Thornton Kabeya with his work “Made in China”. (Image: Gabrielle Ozynski)

“Apart from our residency programmes, we offer professional skills workshops to our artists as well the public, such as video art, animation and performance art, which are not generally taught in art schools,” French says. “When there is funding, we offer an audience development programme, for example where a school is bussed in from a township to visit the studios and interact with the artists. It is often the first time children [from these disadvantaged areas] have been to a gallery or come into contact with art in their life.

“We also offer a curator programme for young people to learn curating skills, taught and guided by experienced curators.”

Apart from these programmes, the Bag Factory’s artists take part in the annual Johannesburg Art Fair and had works on show at the Turbine Art Fair in July, in the Newtown Precinct in Johannesburg. But to keep this up, the search for funds is an ongoing challenge. French notes that since the economic crisis has hit, funding has been affected, with far less donor cash available. To survive in today’s art world, the Bag Factory has had to be creative in bringing in money.

Says French: “We are headhunting artists we like and looking for funding for them; also we are encouraging artists to find their own funding.”

A successful event is its annual Picnic Blanket fundraiser, held this year at Johannesburg’s beautiful Shepstone Gardens. For R450, people were treated to a picnic basket, a bottle of wine, some good jazz, an art auction, and a raffle. There was also an area for entertaining children.

A wine tasting and art evening, and a jazz evening are some of the other events that have been held to raise funds. To apply for a residency at the Bag Factory, make a donation or for any other information, check the website, phone +27 11 834 9181 or email info@bagfactoryart.org.za. 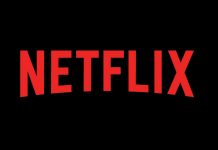