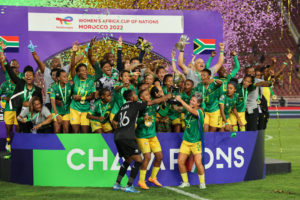 [Johannesburg, South Africa, July 25, 2022]. When COVID 19 hit, the world came to a standstill, and so did sporting activities. The joy of watching national teams of any sport across the world came to an abrupt halt. For South Africa, this was at the height of just having won a rugby world cup. The country’s sporting prowess is one of the most enduring aspects of its human tapestry, as it evokes deep emotions of triumph and unity. Former President Nelson Mandela was one of the first leaders to identify this and use it to get citizens to stand behind its national teams to strive for unity and social cohesion in the face of adversity. Today, South Africa’s sporting prowess is why the country is admired the world over.

On Saturday, July 23, the South African women’s national soccer team, nicknamed ‘Banyana Banyana’, clinched their maiden Women’s Africa Cup of Nations win, to earn their crown as Africa’s football queens. This significant milestone comes following previous efforts to lift the coveted trophy, where Banyana Banyana lost to Equatorial Guinea and Nigeria’s Super Falcons twice, in 1995 and 2018. With the competition extended to 12 teams, Africa’s queens needed to win six matches to secure their first title, and they exceeded expectations by netting the ball in every single game.

In his congratulatory remarks, President Cyril Ramaphosa applauded Banyana Banyana on making history and winning their first ever title saying, “They promised me that they would bring the trophy home. We cannot wait to welcome you back and thank you for flying the flag.”

This sentiment was shared by millions of South Africans, with the Acting CEO of Brand South Africa, Ms. Sithembile Ntombela adding that South Africa’s sporting prowess and reputation continues to be one of our strongest associations and key contributor influencing our positive perceptions globally. “As a country that is highly regarded for its democratic transition, sport is recognised as one of the key pillars that have contributed to social cohesion and nation building. The majority of South Africans draw a substantial amount of national pride from the country’s sporting accolades. The familiarity of the South African brand is largely associated with the country’s sporting prowess, which is one of the key positive contributors to how global audiences perceive us” says Ntombela.

“We congratulate Coach of the year, Desiree Ellis and the entire Banyana Banyana team for their stellar performance. We appreciate how their commitment serves as a reminder on why the world recognises us as one of the few that are able to convert sporting achievements into tools of national unity, and influence. Even in the face of socio -economic challenges Banyana’s win is a reminder of triumph and unity.” said Ntombela. “Now more than ever Banyana Banyana epitomise the true values of our country’s story of resilience even in adversity, significantly so as we celebrate Tata Mandela’s birthday this month. Thank you for Playing Your Part to help strengthen our Nation Brand,” she concludes.

Play Your Part is a nationwide programme created to inspire, empower, and celebrate active citizenship in South Africa. It aims to lift the spirit of our nation by inspiring all South Africans to contribute to positive change, become involved and start doing. A nation of people who care deeply for one another and the environment in which they live is good for everyone.

Play Your Part is aimed at all South Africans – from corporates and individuals, NGOs and government, churches, and schools, from the young to the not-so-young. It aims to encourage South Africans to use some of their time, money, skills, or goods to contribute to a better future for all.