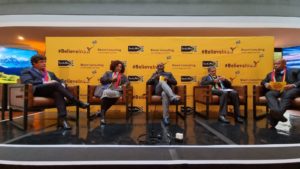 On 22 June 2022, Brand South Africa launched the findings of the Global Reputation Study in collaboration with Bloom Consulting – an international organisation that specialises in Nation Branding and Place Branding.

The Global Reputation Study focused on measuring four pillars of the Nation Brand, namely: Tourism, Talent, Prominence, Trade and Investment. The aim was to examine and reveal South Africa’s Nation Brand performance in the following classifications:

Brand South Africa considers this an especially important exercise because having insights into the Nation Brand reputation internationally, contributes to the country’s strategic positioning direction and competitiveness in a meaningful way.

“In a competitive and unpredictable global environment, it is necessary to understand how stakeholders perceive a country and how that impacts its investment, trade profile and policy environments, reputation standing and favourability” said Shamiso Hlatshwayo, Acting GM: Research at Brand South Africa.

José Torres, CEO and founding partner of Bloom Consulting delivered the results to an audience of several stakeholders in government, business, civil society and academia. Findings from the research conducted show that South Africa is a competitive and attractive destination to do business, invest, and visit.

In compiling the study, Bloom surveyed and rated the perceptions of 10 000 participants comprising investors and travellers from 13 countries.

Trade and Tourism proved to be South Africa’s strongest attributes with up to 70% of the 10, 000 respondents indicating their willingness to visit or do business with the country.

Despite some respondents raising concerns about crime and safety, the overall perception of the country has improved during 2021 with up to 45% of the respondents saying that their perception has improved, compared to merely 3% of those stating that it has worsened.

Most of the respondents rated South Africa among the Top 5 places they are willing to visit, invest or do business, and relocate.

Thoko Modise, Acting CMO of Brand South Africa, said the findings of the study confirmed South Africa’s status as a low-risk, attractive investment destination that is a location of choice for multinationals looking to expand across Africa.

“South Africa is not only blessed with mineral wealth, but it also possesses world-class infrastructure, experienced and entrepreneurial management pool, and a skilled workforce that gives companies that set up shop on our shores competitive edge relative to their peers operating on the continent,” explained Modise.

According to the study, South Africa’s brand was perceived to be as strong as that of UAE, Turkey, Thailand, and Brazil. Many of the respondents rated South Africa among the Top 5 countries to do business with. Businesspeople and investors familiar with the country rate their experience in the country as among the best, rating their experience as in the same level as doing business with the United Kingdom, UAE, and Turkey.

The recovery in South Africa’s tourism was reflected in the study, with the sector proving to be one of the South Africa’s strongest brand attributes. Travelers have a positive perception and experience of South Africa as a tourism destination, rating the country in the Top 5 travel destinations along with strong brands such as Turkey, Egypt and Thailand.

Up to 75% of tourists would love to visit South Africa, expressing that they were attracted by its diverse Nature, Wildlife, Culture and Climate.

Modise said she expected South Africa’s competitiveness and appeal to continue showing significant improvement as the country implements the Economic Reconstruction and Recovery Plan (ERRP) and Operation Vulindlela – a programme led by the Presidency and National Treasury to fast-track implementation of structural reforms in key sectors such as energy, logistics, and energy.

The economic recovery plan and structural reforms are aimed at stimulating the South African economy and attracting investment.