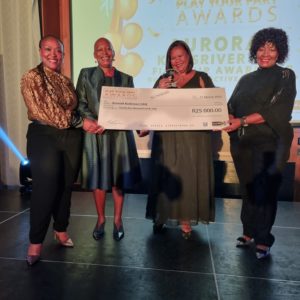 Johannesburg| 18 March 2022 – Latifah Jacobs, is the proud recipient of the first Play Your Part Award for outstanding active citizenship. Jacobs does stellar work through the Aurorah Kuilsriver CAN organisation. The announcement was made at Brand South Africa’s Play Your Part Awards in Johannesburg on 17 March 2022. Jacobs was also the winner of the Poverty Alleviation Award of the Year during the build up to the awards.

The special event was the culmination of a year long journey that Brand South Africa has been on to celebrate ten years of the Play Your Part Programme. It was hosted by Play Your Part Ambassador and LGBTIQ + activist, Thami Dish and creative artist, Lebo Mashile who kept the audience thoroughly amused and engaged.

Brand South Africa’s Chairperson of the Board, Thandi Tobias, Acting Chief Executive Officer, Sithembile Ntombela and Activations Manager, Rabia Metedad presented the awards in front of an audience of Play Your Part Ambassadors, and other stakeholders.

In addition to Latifah Jacobs winning the overall award, other category winners included:

“Today is testament to just how many people are committed to creating a better future for all.  We encourage all South Africans to play an active role in building each other up to uplift communities and make a positive contribution in the country. As we join forces and put hands to the plough, our plea is that citizens, young and old will continue to fly the South African flag with pride” said Thandi Tobias, Chairperson of Brand South Africa’s Board.

The winners have been onboarded as Play Your Part Ambassadors, presented with an award and granted R 5000 for the categories wins to assist in supporting their initiatives. In addition, the overall winner was granted R 25 000.