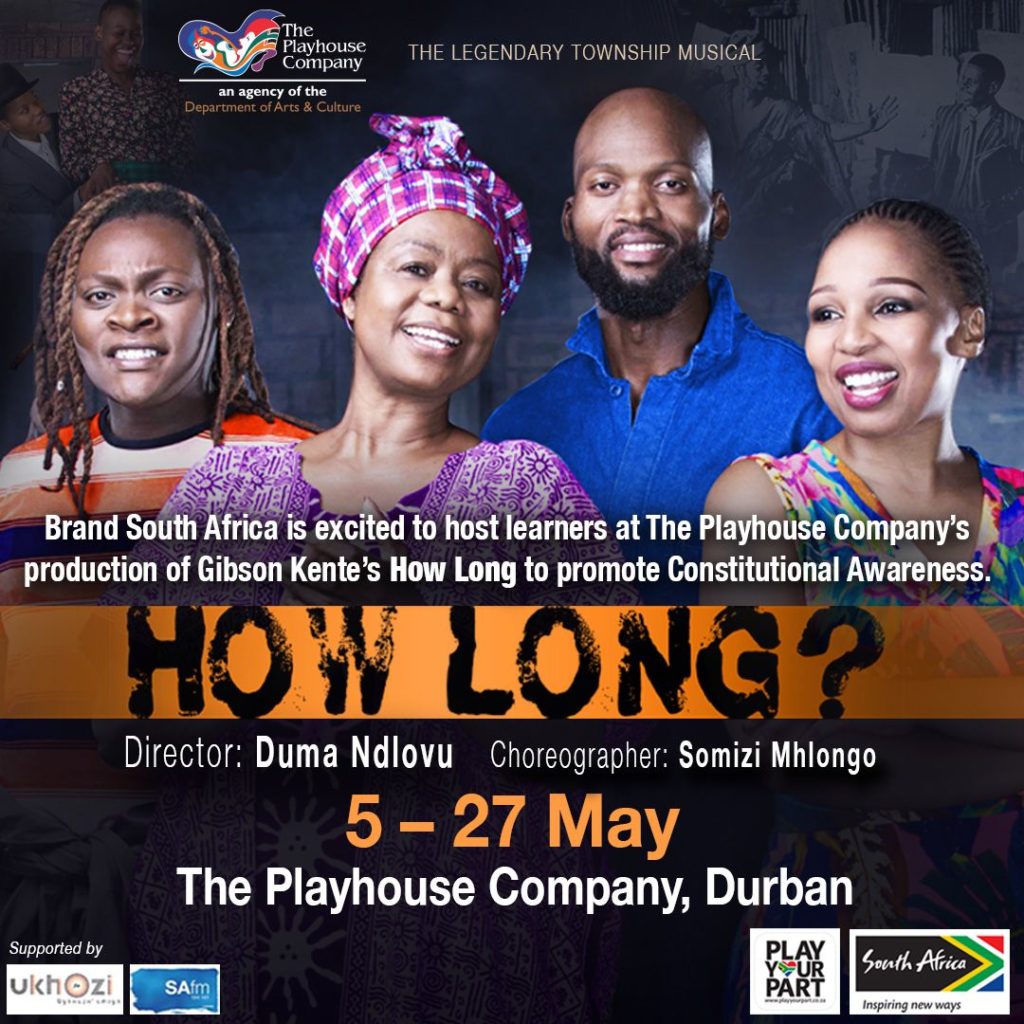 Johannesburg, Tuesday 22 May 2018 – Brand South Africa in collaboration with the Kwa-Zulu Natal’s Durban Play House, will host a three-day youth activation that aims to promote affinity to South Africa’s Constitution which has been hailed as “the most admirable Constitution in the history of the world.”

The three day activation hosted at the Play House which commences today, until 24 May 2018, will  stage a Gibson Kente’s play “HOW LONG?” . This  will be  the first time since it was banned in 1976. Brand South Africa identified this as an ideal platform to promote Constitutional Awareness, and the Constitution’s protection for  freedom of speech, by exposing school learners to the Theatre to watch the  play.

Brand South Africa’s General Manager for Stakeholder Relations, Ms Mpumi Mabuza said: “These programmes use the Constitution as a catalyst for pride and patriotism in order to encourage active citizenship amongst South Africans.

Our aim is to deliver practical insights and knowledge about the Constitution to  inspire allegiance and patriotism  through engagement with the youth.”

South Africa’s National Development Plan (NDP)  outlines steps that South Africa should take in order to eliminate poverty and reduce inequality by 2030, with specific objectives and outcomes on how the country can move forward in realising the NDP’s goals.

“In relation to this – Brand South Africa has been identified as one of the key delivery partners of Outcome 14 (Social Cohesion)  to promote awareness of South Africa’s Constitution – focusing on fostering constitutional values, the promotion of equal opportunities & inclusion,  influence anti-xenophobic behaviour, and drive social cohesion across society through increased interaction among South Africans.

And as part of the these objectives, Brand South Africa has embarked on programmes that seek to promote awareness of the Constitution by highlighting the fruits of freedom in order to popularise the Constitution,” added Mabuza.

The production is currently running at the Playhouse Opera theatre until 27th of May 2018 and includes a cast of 49 professional South African actors, choreographers, artists, composers, directors, producers and theatre personnel.

The production will consist of 26 acts and promises to create national and global awareness of South African historic events.

About Play Your Part
Play Your Part is a nationwide programme created to inspire, empower and celebrate active citizenship in South Africa. It aims to lift the spirit of our nation by inspiring all South Africans to contribute to positive change, become involved and start doing.

A nation of people who care deeply for one another and the environment in which they live is good for everyone.