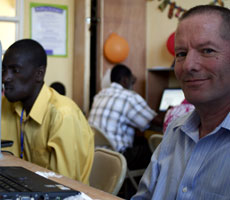 University of the People president (UoPeople) and founder, Shai Reshef, is in South Africa to offer at least 100 deserving high school students scholarships to the university. 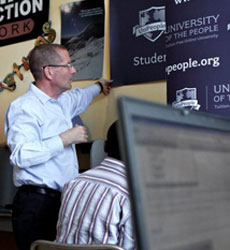 President Shai Reshef in Haiti. So far, students from 138 countries have been accepted into the university, with 1 000 more expected from Africa in 2014. Classes are held online, and are small, with just 20-30 students per class.
(Images: Shai Reshef)

University of the People president (UoPeople) and founder, Shai Reshef, is in South Africa to offer at least 100 deserving high school students scholarships to the university.

The University of the People is a non-profit, tuition-free, online university that provides tertiary education to qualified high school graduates.

Reshef says, “University is expensive and there are a lot of factors that can deny an individual access, including financial, geographic, societal, or personal constraints.”

Earlier this year, UoPeople announced a drive to expand its footprint by reaching out to African students.

Commemorating International Youth Day on August 12, Microsoft announced that the university would be its first implementing partner for its 4Afrika scholarship programme, which, in addition to providing funds for students at UoPeople, will provide mentorship, leadership and technical training, certification, and employment opportunities for at least 1 000 promising African students.

Microsoft employees will mentor students, who can expect internships and job opportunities within the company and its more than 10 000 partners across Africa.

“We are also seeking out other corporations that may take up the challenge to sponsor more students in Africa and we anticipate that South Africa will be a major source country for our scholarship programmes,” said Reshef.

So far, students from 138 countries have been accepted into the university, with 1 000 more expected from Africa in 2014. Classes are held online, and are small, with just 20-30 students per class.

Reshef says, “University of the People is opening its doors to South African students and is engaging with many other corporates and funding institutions to implement similar programmes, which will level the playing field for talented young African minds who might not otherwise have the resources, enabling them to have access to education and skills for accelerated economic development in Africa.”

Education to change the world

Founded in 2009, UoPeople has partnered with several corporates, and educational institutions such as Yale University for research, and New York University, to accept students. The university works with Microsoft on scholarships and has access to its certificate programmes, mentoring, internships and employment opportunities; and with Hewlett-Packard (HP) for general support, scholarships for women, and internships.

Reshef admits there “are not enough women in these programmes. Only about 25% are women and in sub-Saharan Africa, only about 10%. HP and Microsoft are very supportive of women joining the online programmes”.

The organisation has gained widespread support from leading academics with its President’s Council chaired by New York University President John Sexton and including Oxford Vice-Chancellor Sir Colin Lucas; rector emeritus of the Academy of Paris, Michèle Gendreau-Massaloux; and Berkeley Chancellor Nicholas Dirks, among others. The university is also supported by The Gates Foundation, the Carnegie Corporation, the Hewlett Foundation and companies such as Google, Western Union and Estée Lauder. Its page on social networking site Facebook has more than a million supporters.

“Increasing access to post-secondary education in Africa will create a significant impact on the African youth. By empowering them to be the future generation leaders of their communities, countries and the continent, equipped with world-class education, we believe they will be able to take Africa to its rightful place on the world stage” says Reshef.

Named a top 100 Global Thinker of 2012 by Foreign Policy magazine, Reshef has 20 years’ experience in education entrepreneurship. He has been named one of business magazine Fast Company’s 100 Most Creative People in Business, joined the United Nations’s information technology development department as a high-level advisor, was selected by the Huffington Post readership as an Ultimate Game Changer in Education, and nominated as one of technology magazine Wired’s 50 People Changing the World.

Reshef says that by 2025 more than one million people will be deprived of education as there are not enough facilities, and no place for prospective candidates, but that everything needed to make higher learning accessible is available on the internet; “There is no better invention than online studying – the ability to enable people and offer education for all.

“There is no discrimination at this university, there is room for everyone. It’s a viable option that can suit many that are unable to be on a tertiary campus.”

Brand South Africa is proud to collaborate with the National Heritage Council (NHC) and various other stakeholders on its annual programme Heritage Education Schools...