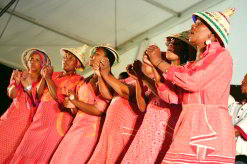 The annual community talent show
allows the workers and their families to
let their hair down. 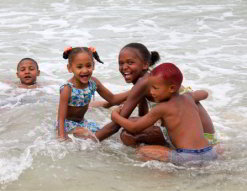 Farm workers in the picturesque farming community of Villiersdorp in the Western Cape’s Overberg area are running a unique community outreach programme for their colleagues, teaching them important life skills ranging from budgeting to conflict resolution.

The Shine programme was started by the Villiersdorp farming community in 2009 in an attempt to improve the quality of life of farm workers and their families and children.

To date, 35 farms have joined the programme and more than 1 000 workers are reaping the benefits.

The programme has two components: the training focuses on providing workers with skills, and the social element aims to broaden the horizons of workers and their families.

“The impact of this training reaches more than just the workers who are enrolled in the programme. Their families, children, communities and workplaces also benefit from their new perspectives and skills,” says Botha.

Because Villiersdorp is a fruit and wine producing area work tends to be seasonal, so the training takes place for 10 to 12 weeks during off-peak periods. The enrichment programme is ongoing, offering monthly excursions and entertainment.

Training starts with a foundation phase focusing on emotional health. Other life skills courses have evolved in response to feedback received from the workers. In 2010 an alcohol and drug abuse prevention course was added and in 2011 money management and budgeting training became part of the programme.

In 2012 the community has requested a shift of focus to communication and conflict management in all relationships.

This is not a quick-fix intervention, says Botha. “The whole emphasis of the programme is to be preventative and long term.”

The success of the programme can be attributed to the workers’ active involvement in the planning and decision-making processes, Botha believes.

Courses and events are determined by the workers themselves and they are also responsible for fundraising. On each farm they elect a Shine official who functions as a link between project coordinators and participants in the programme.

“These officials are the real heart of the project. They organise the events and decide what should happen and how,” says Botha.

Looking to the future, Shine hopes to introduce subjects such as prevention of foetal alcohol syndrome, parenting skills and the practice of safe sex.

While Shine reaches about 1 500 farm children and young adults through various outreach programmes each year, the organisers intend to focus strongly on the community’s young people throughout 2012, as this was a concern raised by parents, says Botha.

“If we can secure the necessary funding we would like to address aspects such as how to be an emotionally healthy teenager, as well as alcohol and drug abuse prevention.”

The enhancement of the workers’ social life and environment is an important part of the outreach programme.

“The idea is to create uplifting, frequent and constructive relaxation activities to encourage positive ways of spending free time,” says Botha. “A strong focus is put on showing rural youth that it is possible to have fun without using and abusing substances.”

Highlights on the calendar are an annual beach outing for about 1 200 adults and children and, in December, Christmas tree festivities, during which almost 700 farm children receive presents.

Pearl of the Overberg

Villiersdorp is a mere 90 minutes drive from Cape Town over the majestic Hottentots-Holland pass, from which the district derives its Afrikaans name, Overberg (meaning “over the mountain”).

A little gem in an area which has much to offer the visitor, Villiersdorp is commonly known as the Pearl of the Overberg.

Nestling in a valley surrounded by the peaks of the Waterval and Baviaans mountains, the quaint village has a mild Mediterranean climate and is a nature lovers’ and health fanatics’ paradise. While it is best known as an apple-growing area, farmers in the district also produce pears, apricots, peaches, grapes and onions.

The valley is also home to the Theewaterskloof Dam, South Africa’s seventh-largest dam and the major source of water for Cape Town.