Home » Media Room » Antarctic team did it for children

Exhausted but elated, the team arrived at
the South Pole on 21 January and proudly
hoisted the South African flag. 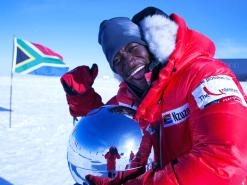 Celebrating the best day of his life,
19-year old Nzuzo Mnikathi clutches the
mirror beacon, the official marker for
the South Pole.
(Images: The Unlimited)

A group of South Africans reached the South Pole on 21 January as part of an expedition to create awareness for The Unlimited Child, a project aimed at improving the learning environment at early childhood development centres and crèches.

The eight-member team, of whom six were South Africans, traversed the snow-covered Antarctica over 111 kilometres on skis, and took 14 days to reach their final destination.

Among the adventurers was 19-year-old Nzuzo Mnikathi, the youngest black person to reach the Antarctic.

Also with the team was South African explorer Sean Wisedale, the first African to achieve the Seven Summits title – earned by reaching the summit of the highest peaks on each of the seven continents.

Based in Durban, The Unlimited Child highlights the importance of child development and stimulation in the formative years of a child’s life – from birth to 6 years – and has touched the lives of over 13 500 children in 228 crèches since 2008.

Crossing the Antarctic snow desert is a gruelling journey in anyone’s books, but one which the young, inexperienced Mnikathi took in his stride. He joined the expedition as ambassador for Unlimited Child, hoping to raise funds.

“I want to use this opportunity to show the world that all things are possible, that difficulties can be overcome with determination and the right attitude,” he said before the group set out.

“Yes, this is about setting a new record as the youngest black person to reach the South Pole, but more importantly, it’s about the challenge of trying to achieve something of value against the backdrop of an unpredictable and unforgiving environment.”

Suffering from frostbite to his toes, fingers and nose, Mnikathi’s dream almost ended when, early into the excursion, team doctor Peter Berning decided that Mnikathi could not risk skiing, for fear that it would aggravate his condition.

Fortunately the young adventurer was able to join the back-up team to rest his feet, and on the final day got back on his skis to complete the stretch to the destination point. He later said it was the best day of his life.

No stranger to life’s hard punches, this KwaZulu-Natal resident lost both his parents at the age of nine. With understated simplicity he related a typical day during the excursion:

“I want to say that down here, you need a whole new set of skills just to survive. It is cold, really cold – and everything you do has to be done with this in mind.”

Skiing for seven to eight hours a day and pulling a 40kg sled in conditions which can drop to -30 degrees in summer, depending on the wind chill factor, is a tough challenge. The team did on average about 20km per day.

Mnikathi’s journey is even more remarkable if one considers that previously he hardly set foot outside his home province, had never camped before, and didn’t know how to ski. He took his first plane trip in October 2011 when he was flown to Johannesburg to be interviewed on television.

But no amount of training with truck tyres and sitting in cold-rooms could quite prepare him for this adventure, he admitted. His sleeping bag kept him warm enough for just two layers of clothes, but normal daily activities required five layers.

All clothes had to be kept inside the sleeping bag, otherwise they would become so cold and stiff as to be unusable. And trying to stuff a puffy sleeping bag into its bag while wearing five layers of gloves was certainly not something Mnikathi ever practised while growing up with his grandmother.

Unlimited founder and director Iain Buchan also made the tough journey and had high praise for the youngster.

“Nzuzo is a living example that people have unlimited potential,” he said. “Here is a young man who has had a tough life, but is changing his future and has taken up our challenge to be an ambassador for The Unlimited Child and to become the youngest black person to ever walk to the South Pole”

The team described their experiences in a daily blog – sometimes the temperature dropped to -36 degrees. Wisedale’s “brutally cold” could hardly describe conditions which sometimes allowed a pace of less than two kilometres per hour.

This is Wisedale’s second successful Arctic expedition after completing the first in 2010.

While Buchan has been fascinated by the South Pole all his life, the end destination was more about giving all of South Africa’s 6-million children under the age of seven a chance.

The idea for the project first came to him after a casual conversation with his domestic worker, who mentioned that her grandchild had just failed Grade 2, and he realised then the importance of early childhood development and its influence on a child’s future.

More importantly, he became aware of the important role that early childhood development centres play in providing the right environment and stimulation for young minds.

Toys that many children take for granted, which teach the important but basic skills of colours and shapes, are not always available at crèches in South Africa’s less affluent areas. It is believed that this situation can have a severe impact on the child’s brain going into the future.

So far,TheUnlimited Child is involved in 228 crèches in KwaZulu-Natal, providing educational toys specifically designed to develop cognitive and fine motor skills in pre-school children. At the same time, care-givers are taught how to use the toys effectively and to create a stimulating environment.

South Africa is a signatory to the Antarctic Treaty, an agreement signed in December 1959 to ensure that the frozen continent will be used exclusively for peaceful purposes and in the pursuit of scientific discovery.

Thirty-seven countries have acceded to the treaty. South Africa became a consultative member in 1961, a status that allows the country to embark on substantial research activities here.