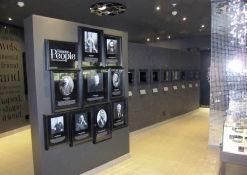 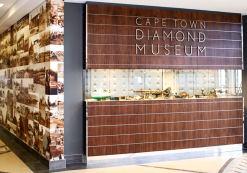 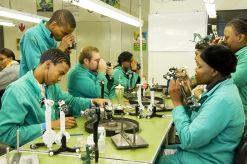 Upmarket tourism in Cape Town has a new attraction with the opening of the Cape Town Diamond Museum, a glitzy establishment that pays tribute to the precious stone and South Africa’s major contribution to the global diamond industry.

Shimansky, a fine jewellery manufacturer specialising in precious gems such as diamond and tanzanite, is the driving force behind the new museum.

Set in the newly upgraded Clock Tower precinct of the V & A Waterfront, Cape Town’s top tourism attraction, the Cape Town Diamond Museum explores the history of diamonds in South Africa, and showcases the fine craft of diamond cutting and jewellery manufacture.

At the official opening, Mariëtte du Toit-Helmbold, CEO of Cape Town Tourism, said the museum will give visitors a first-hand experience of South Africa’s important contribution to the diamond trade.

“We have a fascinating story attached to the diamond industry in South Africa,” she said. “For Cape Town to share this story with the world is very important.”

By telling the story of the diamonds, considered to be the world’s oldest and most coveted jewel, the museum also aims to rekindle a love for the gem.

Du Toit-Helmbold said the museum is important for Tourism in Cape Town and South Africa. “We need to add more interesting attractions to our tourism offering.”

In keeping with its subject, the museum is no musty old building crammed with dusty manuscripts. The interior sparkles: its modern and sophisticated design elements such as wood panelling, bright mirror walls, good lighting and modern glass display cabinets create an opulent setting, a fitting showcase for the brilliant stone.

The museum gives prominence to South Africa’s influential role in the global diamond trade, and follows the entire journey of diamonds from their formation to the history of the diamond industry, famous people associated with the diamond trade such as the Oppenheimer family, how they are cut and polished, and how diamonds are graded.

Tracy Wilkin of Shimansky says one of the museum’s biggest drawcards is the display of a kimberlite rock specimen, known as peridotite, dating back 3-million years. Kimberlite is a type of potassic volcanic rock in which diamonds are often found.

Authentic artefacts and real-size replicas of the world’s most famous diamonds are also on display.

Visitors can explore the museum at their leisure, or take a guided tour with a diamond professional.

South Africa has one of the most notable diamond-mining industries worldwide, with the most diverse range of diamond deposits in the world found here.

Some of the world’s largest and most valuable diamonds, including the Cullinan, the Hope and the Taylor Burton, were discovered in South Africa.

The world started taking notice of South Africa in 1869 when the 47.69-carat Star of South Africa diamond, also known as the Cullinan 1, was discovered near the Orange River at the border of Namibia and South Africa. According to the museum, this is the largest cut diamond in the world.

A diamond rush followed its discovery, and by 1888 the first working mines in the area were established. As prospecting increased, more diamonds were discovered in other parts of Southern Africa.

The discovery put a spotlight on South Africa’s mineral wealth and modern diamond mining took off in the 1870s. During the 19th century, South Africa produced most of the world’s diamonds.

According to international diamond trader Leibish & Co, the discovery of the Star of South Africa unseated the reputation of countries such as India and Brazil as the world’s only major source of diamonds.

South Africa’s diamond industry produces 10 million carats annually, of which 90% is exported, according to the Department of Public Enterprises. It is also responsible for 9% of global production and is ranked fourth in the world in terms of rough diamond production.

The Cape Town Diamond Museum is open seven days a week, from 9am to 9pm.