CEO of BSA, Miller Matola, donates a
cheque for R20 000 (US$2 871) to Shirley
Merime, co-founder and chairperson of the
Ebenezer Hannah Home. 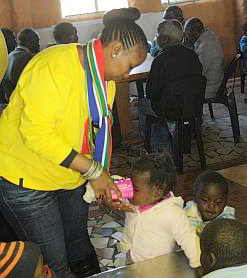 A BSA employee helps a thirsty child
during the 67 minutes of Mandela Day.
(Images: Ray Maota)

Brand South Africa (BSA) put its Play Your Part campaign to work on International Mandela Day by helping out at the Ebenezer Hannah Home and donating R20 000 (US$2 871) to the institution.

Employees of BSA, along with their CEO Miller Matola, made the trip to the Walkerville home, south of Johannesburg, on 18 July 2011 and spent more than 67 minutes there interacting with the elderly residents and feeding and caring for the young.

International Mandela Day is celebrated every year on this date to celebrate the birthday and humanitarian work of South Africa’s former president and Nobel laureate.

The Play Your Part campaign was launched on 13 July and appeals to every South African to do something, big or small, to contribute to a better future for all.

Matola said: “As we celebrate Mandela Day and initiate our Play Your Part campaign, we instil the ethos of our former president to service and self sacrifice for others. We commend the home on the work it does in making a difference in the country.

“This kind of work goes beyond the walls of this establishment and makes South Africa a great country to live in.”

After receiving the cheque from Matola, Shirley Merime, the home’s chairperson and co-founder, said: “I truly thank God that our prayers are answered on a daily basis. Thanks to the IMC we will now be able to get equipment for the home.

“I’d also like to wish Tata Mandela a happy birthday as it is because of him that an orphan child like me is able to play an active role in the community and help others.”

The youngsters at the home then reciprocated by putting on a song and dance performance for the IMC staff.

The Ebenezer Hannah Home is an NGO catering for the orphaned, elderly and destitute. It caters for people in the informal settlements of Thula Mtwana, Sweet Waters, Bheka Phambili and Majazane in the deep south of Johannesburg.

Leo Makgamatha of BSA’s marketing department said: “We chose an NGO along with the Mandela Children’s Fund that resonated with the former president’s belief in social cohesion and the upliftment of children faced with adversity.

“The money will be used to buy mattresses, bedding and other equipment.”

The pastor and teacher

The Ebenezer home is run by founders Thomas and Shirley Merime whose life story is the stuff movies are made off.

The couple both grew up in orphanages as Thomas’s parents abandoned him, while Shirley’s mother died of cancer.

After roaming the streets, Shirley ended up at the Roman Catholic Orphanage in Pofadder in the Northern Cape, where she met Thomas.

Shirley, a qualified teacher and Thomas, a building contractor, married and had children years later after settling in Eldorado Park in the south of Johannesburg, but their struggle continued.

Thomas had a violent streak and would victimise his family, which led to the couple divorcing and Shirley taking the children with her.

Thomas said: “I lost everything and nobody wanted anything to do with me. I was in the gutter.”

But Shirley said she never stopped praying for the man she met as a 10-year-old at the orphanage, and this led to the down-and-out Thomas becoming a pastor.

He said: “I not only got my family back, but also everything else I had lost and much more. Look at the size of my family at the moment.”

The home, which was established in 1992 and accommodates nearly 120 people, survives on donations and volunteer work, but has a plan to become self-sustainable.

It has a bakery with the capacity to make at least 1 000 loaves of bread a day to sell to shops in the surrounding areas.

Thomas said: “If we could get a month’s supply of baking material, we would be able to sustain the bakery and be profitable. The profit can be put towards other needed necessities at the home.”

The refuge also runs a tuck-shop for passers-by and a vegetable garden to feed the residents.

Its crèche caters for children at the home as well as those living nearby.

“We do not charge the outside children a fee, but ask their parents to contribute something towards the home every month whether it’s volunteer work or whatever money they might have to help in running the home.”

Rock of help for many

Ebenezer, which means “the rock of help” in Hebrew, is well known to welfare workers and hospitals throughout Johannesburg.

“We have helped thousands of people over the past 19 years. If somebody has to be discharged from hospital and has no place to go or a family, the hospital calls us,” said Shirley.

“We seldom turn anyone away, but one of our conditions is that the person must be able to move around as we cannot afford caretakers and everybody has to contribute to the running of the home,” added Thomas.

The home’s study centre for the children at school is open to youngsters from the local community, but is in dire need of books.

The home also feeds children from the surrounding community if there is a need.

Thomas said: “We encourage and empower the community at the centre to be self-reliant and to enhance skills development. We ensure that the children get the necessary education and encourage religious and cultural instruction.”

David Seoehlane, a grade nine pupil who has lived at the home for two years, said: “I’m from an abusive home in Vlakfontein and was brought here by police. I would like to become a social worker because of the situation I’ve been through and the help I have received from Mama Shirley and Pastor Thomas.”