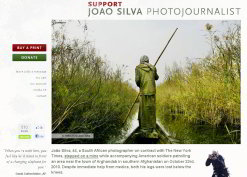 South African photojournalist João Silva stepped on a landmine in southern Afghanistan in October 2010 and lost both his legs below the knees. Silva was travelling with the Fourth Infantry Division of the US Army at the time, on assignment for the New York Times.

Now, a new website allows supporters to help raise money for the father of two and his family through either a donation or purchase of a print.

Photojournalist, author and film editor Greg Marinovich, a former colleague and close friend of the injured Silva, and his wife Leonie have created the website to support Silva through his recovery and convalescence, which could take as long as two years, according to Marinovich.

Prints are available in two categories. The first is From the Edge of History, which documents Silva’s recent assignments in Iraq, Malawi, Lebanon and Afghanistan for the New York Times, and includes some historic photos from South African townships in the 1990s.

Vintage Work Prints feature South African scenes captured between 1993 and 1996. Silva printed the images by hand and has signed, dated and captioned each one. There are only 181 prints in the set, and only one of each. A number have already been snapped up.

Fans of Silva’s work can also make an outright donation, leave a message of support, or view his images by visiting his official website.

Hailed by his colleagues as selfless, committed and courageous, Silva continued taking photos even as the medics worked to save his limbs, according to New York Times executive editor Bill Keller. A team of minesweepers and dogs had already surveyed the scene and pronounced it clean, but the mine was small enough to escape detection.

Keller added that he’s certain that not even serious injury will keep Silva away from his work, and that the photographer would return to duty as soon as he is able.

“We have little doubt he will continue photographing, but he will certainly not be able to go to war zones,” said Marinovich in an entry on the New York Times blog.

Silva has worked across the African continent, in the Middle East, Russia, the Balkans and Central Asia. His often harrowing images have earned worldwide acclaim and many awards, including the prestigious World Press Photo in 2006.

He is known for his work as a member of the Bang Bang Club, a group of four photographers who covered unrest in South African townships during the late 1980s through to the mid-1990s. The other regular members were Greg Marinovich, the late Kevin Carter, and the late Ken Oosterbroek. Carter won the Pulitzer Prize for his now-famous image of an emaciated Sudanese toddler stalked by a vulture.

Silva is still in intensive care at the Walter Reed Army Medical Centre in Washington DC.