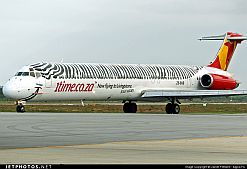 An aircraft from the 1time Airlines fleet.
(Image: jetphotos.net) 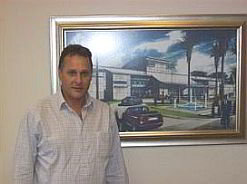 Low-cost airline 1time will begin flying from Lanseria International Airport, north-west of Johannesburg, in 2011 – a move that will benefit the airport as well as the carrier.

“There are also several African airlines which have also expressed interest in flying from the airport,” said Gavin Sayce, Lanseria airport manager.

“The ending of a five-year exclusivity agreement between Lanseria and Kulula Airlines operator, Comair, has opened the market for new operators and has also prompted these upgrades,” said Sayce.

Kulula Airlines is one of South Africa’s most popular budget airlines, the others being 1time and Mango. Kulula has been operating from Lanseria since 2006.

“The sub-Saharan African air market is opening up rapidly and Lanseria is ideally placed to serve it,” he added.

The airport plans to build a new runway, a multi-storey parkade, improve its shuttle service and is also in talks with the hospitality industry about building a hotel in the airport grounds.

Sayce said: “Plans for an upgraded runway have been on the drawing board for some time, but we put the project on ice due to the 2010 Fifa World Cup.”

Lanseria’s apron, where the aircraft refuel, load, unload and park, can accommodate six narrow-body aircrafts at one time, but has capacity for this to be extended to nine.

Last year the airport increased its parking to 1 800 bays. Additional parking will be accommodated in the new multi-storey parkade.

“While the airport’s domestic terminal is reaching capacity, there is still room for expansion in international departures to cope with growing regional flights,” said Sayce.

“We are in advanced talks with Lanseria’s management and expect to begin flights from the airport in the first half of next year,” said Glenn Orsmond, CEO of 1time Airlines, in the Business Day.

“We have submitted our schedules and we are in the process of ironing out the final details of the agreement,” he added.

In addition to various domestic routes, the airline already has flights to Livingstone in Zambia, Zanzibar and Maputo. Orsmond said: “We will continue to apply for rights to new African routes as they come up.”

With 1time now also appealing to an exclusive market of travellers who prefer Lanseria to bigger airports such as OR Tambo, east of Johannesburg, Kulula plans to expand its presence there.

Kulula has already secured the rights for flights between Lanseria and Maputo. Gidon Novick, joint CEO of Comair said: “We will also add further domestic flights once the new runway is in place.” The airline already flies, on average, seven times a day to Cape Town and six times to Durban from the airport.

Sayce said: “In the past five years since Kulula launched its first flight, the airport has grown rapidly and this year more than a million passengers used the airport.

“For us the challenge is to keep the service levels and convenience of a small facility, while expanding the airport. That is what sets Lanseria apart from other airports.”

Lanseria is Gauteng province’s second international airport and is privately owned. The other is the more high-profile OR Tambo International, which is still the entry point for most commercial travellers into South Africa. Lanseria is the preferred entry point for celebrities, heads of state and other VIPs.

Lanseria was launched in 1972 by two pilots from Pretoria, Fanie Haacke and Abe Sher. The facility was opened to air traffic by the then minister of transport, Hannes Rall, on 16 August 1974. On that day, a Learjet ZS-MTD was the first plane to land at the new facility.

In 1975 Lanseria was chosen to host Air Africa International, an air show, which was a major event on the international aerospace calendar.

When former president Nelson Mandela was released from prison in May 1990, he was flown to Johannesburg via Lanseria.

In the same year, Lanseria’s co-owners, the Roodepoort and Krugersdorp Municipalities and the Transvaal Administrator, announced that the airport was to be sold. It was brought to tender and the tender was awarded to a consortium of private investors in 1991.

Government concerns such as immigration; border police, which is part of the South African Police Service; customs and health; nature conservation; agriculture; national intelligence and veterinarian services are all represented at Lanseria.

The airport has a large variety of aviation-related tenants, ranging from scheduled and charter operators to aircraft sales, freight services, flight schools, and other maintenance services such as engineering, upholstery and spray-painting. Wi-fi access, foreign exchange and duty-free shopping are also available.