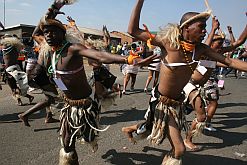 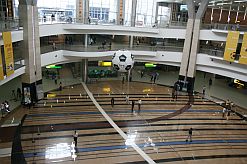 The OR Tambo International Airport
was revamped ahead of the World Cup.
(Images: Bongani Nkosi)

The recent 2010 Fifa World Cup has eradicated many myths about South Africa and boosted growth prospects for the country’s tourism industry, the government said on 7 September 2010.

The tournament created a bright image of the country, Minister of Tourism Marthinus van Schalkwyk said in a statement. “The positive brand value that has been unlocked is immeasurable. The event helped us to turn the corner in terms of foreign perceptions about tourism safety.”

The Department of Tourism met with industry role-players in Kempton Park, near Johannesburg, on 6 September to review the tournament’s impact on the sector.

The meeting is part of government’s ongoing process of evaluating the benefits associated with hosting the football World Cup.

In 2010, and especially during the tournament, South Africa managed to position itself as a high-quality tourism destination, according to the minister.

“The World Cup opened up a new window of opportunity for the tourism industry,” said Van Schalkwyk. “It is up to all of us to make use of this opportunity.”

It speeded up the construction and renovation of vital infrastructure, such as airports and new accommodation facilities, Van Schalkwyk added.

The King Shaka International Airport in KwaZulu-Natal was built at a cost of R6.7-billion (US$922-million), while the country’s two other international airports, OR Tambo and Cape Town, received multibillion-rand upgrades.

Domestic airports, including those in Bloemfontein, East London, Upington and Kimberley, also underwent massive revamps worth millions of rands.

“These are all important investments in building the future capacity of the tourism sector,” said Van Schalkwyk.

Tourism on top of its game

The country’s tourism industry was on top of its game during the World Cup, the minister said.

In addition to creating a safe environment for tourists and completing airport and road revamps on time, the sector excelled in service delivery in the formal accommodation sector, management of increased airlift volumes, the security of air space and the implementation of new systems to facilitate passenger movement, Van Schalkwyk said.

“Overall, the collective efforts in the tourism sector were key in delivering an exceptional World Cup,” he added. “As a country, a people, a government and private sector we built a shared vision and delivered on it.”

However, the industry could have done so much more in other areas, the minister said. These include ensuring greater benefits for small, medium and micro enterprises; better managing the expectations of the informal accommodation sector; “getting accommodation prices right in the face of the global economic downturn”; and listing up-front availability of accommodation on a database.

The tourism department is planning to set up a national convention and events bureau to make the most of the World Cup legacy.

Cashing in on the infrastructure investments is one of the most important tasks ahead, the minister said, adding that “our proposals in this regard have been received very well by the industry”.

The bureau will be part of the five-year National Tourism Sector Strategy (NTSS) which the department introduced in May 2010. It will be positioned to market events and promote tourism businesses.

In light of South Africa attracting more than 1-million tourists during the month-long World Cup, the NTSS is now aiming to increase the number of foreign arrivals in the future.

Some 9.9-million foreign visitors came to the country in 2009, but through the strategy volumes are hoped to reach 13.5-million by 2015.