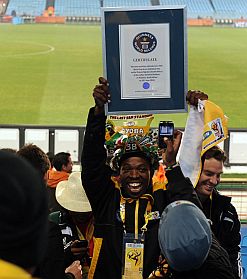 Ngcobo was excited after being given the
certificate. 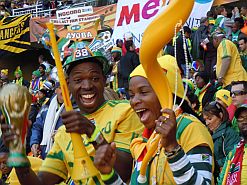 Thulani Ngcobo’s passion for football has scored him a place in sporting history, after the fanatic fan set a new Guinness World Record for the most Fifa World Cup matches attended by an individual.

The 29-year-old Ngcobo claimed the record after watching his 21st full match on Friday 25 June at Jason Curran in Pretoria, where Spain beat Chile 2-1. Guinness World Records adjudicator Jason Curran presented Ngcobo with a certificate after the match confirming he’d broken the record.

“I’m very excited. There’s nothing like being a world champion, especially with something that involves soccer,” Ngcobo said. “I love soccer.”

Ngcobo, who comes from Pretoria’s Soshanguve township, has in fact attended 28 matches in all 10 host stadiums. The Spain-Chile match was the 21st full 90-minutes he’s attended, as he’s been late to others because of his hectic travel schedule.

The Kaizer Chiefs fan has been attending at least two matches a day since the tournament started on 11 June, having to travel long distances to get from stadium to stadium, often by plane.

And he hasn’t been home since the tournament kicked off. “I’ll only be home after the World Cup.”

But it’s all been worth it, as he’d had the opportunity of a lifetime to watch some of the world’s greatest football players in his home country. It’s been fantastic, he said, to see the likes of Wayne Rooney, Ronaldo and Lionel Messi.

Before he won the MTN competition, Ngcobo had budgeted to buy tickets for at least 10 World Cup matches. “I’m always at the stadium,” he said. He’s a serious fan of both Soweto club Kaizer Chiefs and Bafana Bafana, the national squad, attending matches whenever either team plays.

The match where Portugal thumbed North Korea 7-0 remains his favourite of the 2010 tournament. “There was a time it felt like I was watching highlights of a match, with a goal coming in after a goal,” he said.

Though he’s already broke the record, Ngcobo 2010, as he’s nicknamed, is out to add to his record. His next game, to be played today, 28 June is a Group of 16 encounter between favourites Brazil and high-spirited Chile at Ellis Park in Johannesburg.

“I aim to attend at least 30 games, so that a new challenger would struggle to break that record.”

So Ngcobo has a lot more great football to enjoy, all the way to Soccer City in Johannesburg on 11 July for the 2010 Fifa World Cup final.