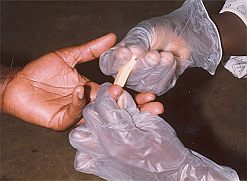 A clinician in Mali takes blood for HIV
testing. (Image: A. Alisalad/ORC MACRO
for US Aid) 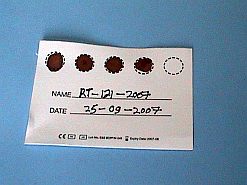 An example of a filter paper spotted with
small samples of blood.
(Image: Pathfinder International)

A new early diagnostic test for HIV could save many lives, as all it needs is a single drop of blood.

Currently still in development, the dried blood spot (DBS) test offers special hope for infants, as they cannot reliably be tested until 18 months old with current methods. However, a six-week-old infant may be accurately tested with the DBS technique.

The group of 12 researchers is led by Mohan Somasundaran of the Massachusetts University’s medical school, and includes US-based health and paediatric specialists as well as staff from the Heal Africa hospital in Goma, Democratic Republic of Congo.

To date 56 patients have been tested, including 33 HIV-positive youngsters ranging in age from five to 21 years, four HIV-positive adults, and 19 infants born at the Heal Africa hospital to HIV-positive mothers. The researchers also tested a control group of 44 HIV-negative individuals. The testing period ran from May 2005 to January 2009.

The scientists published their findings at the beginning of June in PLoS ONE, an online open-access science journal of the Public Library of Science. All PLoS ONE articles are peer-reviewed.

Normal test methods are often impractical, for various reasons. Conventional antibody tests cannot be carried out on children under 18 months old, because they still carry maternal antibodies which cause unreliable results.

The commercial Polymerase Chain Reaction (PCR) test that amplifies and detects viral DNA is expensive and needs larger volumes of blood as well as special storage and transport conditions.

In contrast, the new test uses dried blood spots on filter paper, which is a much more convenient technique for clinicians in remote African areas. These can easily be packaged in a sealable plastic bag containing a desiccant and transported to a centralised laboratory. As a last resort, they may even be posted.

The technique uses a real-time LightCycler PCR assay and involves the extraction of viral genetic material from each 50-microlitre spot of blood, using the DBS format. The Lightcycler, developed by global healthcare company Roche, is an instrument that performs PCR tests for a variety of functions, including early disease diagnosis and detection of viral DNA.

DBS not only facilitates the logistics of collecting, processing, and shipping samples in areas with limited resources, but the samples were found to be of low biohazard risk. In addition, DBS samples, stored at ambient temperatures for a week, were stable and produced reliable results.

Results were obtained accurately and twice as quickly, and the cost was around 40 times cheaper than available commercial tests.

The test can also be used to monitor the effectiveness of antiretroviral (ARV) therapy over time, as it can measure a patient’s viral load.

However, the success of the technique in getting infants to early treatment depends on a number of factors. These include adequate training of clinic and laboratory staff, timely submission of samples, capacity and quick turn-around in the laboratory, and improved tracking of patients and their samples.

Almost 2.5-million children around the world are infected with HIV. Of these, only 6% who need ARV treatment in sub-Saharan Africa actually receive it, according to paediatric professor Annette Sohn of the University of California.

Without treatment, 35 out of every 100 HIV-positive infants in Africa will die before their first birthday and only 47% will survive beyond the second birthday, according to a study published in medical journal The Lancet.

Thus, if the 18 month waiting period is observed, just 65% of HIV-positive infants will make it to the age at which they can be tested. The DBS method reliably overcomes this hurdle.

The earlier HIV is diagnosed, the better the chances of survival. This was proven in a trial carried out in South Africa and led by paediatricians from Wits and Cape Town universities. The results of that study, carried out on 377 babies, found that putting infants on ARV therapy before the age of 12 weeks reduces early deaths by an astounding 75%.

These tiny patients were divided into three groups, two of which received ARV treatment from the age of six weeks until their first or second birthday. The control group only began treatment when the signs of HIV infection became apparent, which is the regime followed by most countries.