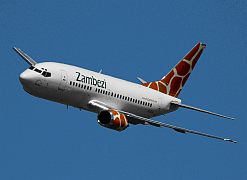 Zambezi Airlines has made its maiden flight to South Africa. The Zambian private airline launched in July 2008 and took 11 months to establish its domestic operation before launching into international airspace.

Zambia’s national carrier Zambian Airways, based in Lusaka, suspended all its operations in January 2009, citing high fuel costs as the main reason for its decision. Since then, travellers between Lusaka and Johannesburg have been able to use only South African carriers, which between them offer 58 flights a week to destinations in Zambia.

Zambezi Airlines touched down in Johannesburg for the first time at the beginning of June. The move is expected to help open up growth and business opportunities in the Southern African region.

Scheduled flights to Johannesburg commenced on 20 June with two Boeing 737-500 aircraft, each of which offer 99 economy class and 12 premier business class seats.

Ndola, in the centre of Zambia, is the country’s second largest city and the hub of the Copperbelt mining region. The historical Livingstone, in south Zambia, has its origins in the colonial occupation of Africa. The city, a tourism centre for the region, sits on the Zambezi River just 10km from the mighty Victoria Falls, known locally as Mosi-oa-Tunya (the smoke that thunders).

All routes run both ways. Daily direct flights between Lusaka and Johannesburg are now available, with four flights between Johannesburg and Ndola, and at least three times a week between the other cities. Once the second aircraft is fully operational the airline plans to offer twice-daily flights to and from Lusaka.

The airline currently leases its aircraft from GE Capital Aviation Services, a leading player in commercial aircraft financing and leasing. Craft are maintained in South Africa by Safair, and by the airline in Lusaka.

Zambezi Airlines has embarked on a regional expansion programme and will continue to widen its reach over the next three years.

On arrival at OR Tambo International Airport on 4 June, the airline’s CEO, Cornwell Muleya, said Zambezi Airlines has grown into a new regional carrier, one that is ready to help contribute to the economic development of the country and the Southern African Development Community (SADC).

Muleya explained that market conditions were favourable for the growth of the airline into new territories. This situation also encouraged shareholders and the highly experienced management team to upgrade the fleet to the quieter and more fuel-efficient Boeing 737-500 series.

“Zambezi Airlines intends to grow its fleet in line with market demand,” said Mulaya, adding that partnering with other regional carriers is an important strategy for growth. Zambezi Airlines management plans to list the company within 36 months.

“We are proud and confident that this, our first expansion into Africa, will contribute significantly to the region’s as well as the continent’s future prosperity,” he said.

Zambezi Airlines chair Morris Jangulo said the vision of Zambezi Airlines was to operate to world class standards within Zambia and the SADC region, maximising business growth and contributing to regional development and increased international tourism.

Speaking at the official launch of the airline, held in Kyalami, north of Johannesburg, a week before the Confederations Cup kickoff, South Africa’s Minster of Transport Sibusiso Ndebele welcomed the airline to South African skies.

Ndebele was quick to point out that the introduction of a new regional carrier was good news for the 2010 Fifa World Cup.

“The forthcoming World Cup is an African event,” he said, “and we, as government and the nation at large, have pledged that it will leave a proud legacy from which our children and our communities will benefit for many years to come. To this end, I am appreciative that we have a Zambian carrier who will certainly play a pivotal role in providing air travel capacity to these key events.”

Ndebele expressed his confidence that Zambian and South African fans would sit shoulder to shoulder at the forthcoming football spectacular.

He mentioned that South Africa has reached a number of compliance agreements with regard to the Yamoussoukro Decision for the liberalisation of air transport markets in Africa.

This policy, adopted in 1999 by African civil aviation authorities, is intended to open up the continent by implementing, among others, multiple designations of eligible airlines and unlimited air traffic capacity and frequencies.

“Such an increase in air traffic frequency capacity is only viable when operators show confidence in the market and continue to operate flights to entry points,” said Ndebele. “To this end, I must applaud the new entrant to our country, Zambezi Airlines.”

The minister pointed out that the introduction of a new Zambian designated airline clearly shows that there is a growing demand for air travel between South Africa and Zambia.