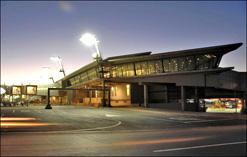 An outside view of the new terminal. 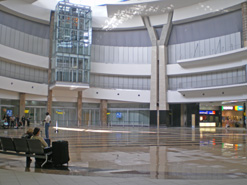 The arrivals area inside the terminal can
accommodate thousands of visitors to
South Africa. 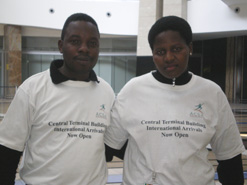 Sphiwe Mfeka, with his colleague
Nomathansanqa Maqashalala, help show
the public around the new terminal. 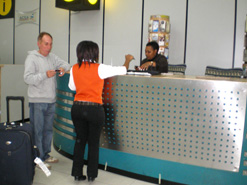 A passenger is assisted at the information
desk 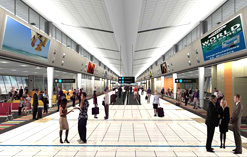 An artist’s impression of the new retail
area and waiting lounge once its completed
inside the terminal.
Image: courtesy of Acsa.

Johannesburg-born Sphiwe Mfeka has always loved airports. So much so, that his cousin who works at the OR Tambo International airport, used to take him along to work to give him an opportunity to see the arriving and departing planes.

Today, Mfeka still has the opportunity to visit his favourite place, his love for being around the aircrafts has been somewhat realised after he was hired as an i-Help Agent formation officer in the brand-new international arrivals terminal at the OR Tambo International Airport.

Phase one of the new R2.3-billion (US$287-million) terminal opened its doors on 3 September.

The new terminal has been built not only to accommodate an expected increase in international visitors ahead of the Fifa 2010 Word Cup, but also to implement the airport’s new, more user-friendly customs control process.

Unlike before, the arrival terminal will house various retail facilities available, including a post office, cellular phone shops and foreign exchange services. Most of the restaurants are expected to start cooking in December.

Although it’s only the arrivals sections that’s currently operational, the Airports Company South Africa (Acsa) says they expect the departure lounge to open its doors to the public in April next year.

The new departures terminal will boast 75 check-in counters, and will link the international and domestic check-in facilities.

Keeping in line with consistency of the airport’s design, departures will be predominantly on the upper level and arrivals on the ground level.

One of the key challenges that come with the launch of the new terminal is the confusion of the changed venue and structure of the airport. Those coming to pick up incoming international passengers have to be redirected.

To this end, assistants like Mfeka, come in handy.

There are two sets of information officers. The first, clad in orange waistcoats, are located along the route leading to the new terminal from the various parking areas. The second set of officers then usher those picking up passengers to the new terminal and help them find their way around.

The building of the entire terminal, with all the components completed, is expected to be fully operational by December 2009. This will include the complete installation of a new baggage management system with 10 new baggage reclaim carousels, four of which will be 90m long.

The airport’s general manager Chris Hlekane, says the launching of the new terminal falls in line with the completion of the O.R. Tambo International Gautrain station. This is the first Gautrain station to be completed.

The railway line will be elevated above the airport and will be directly connected to the central terminal building.

Hlekane described the opening of the new terminal, as an indication that South Africa is making great strides in preparing itself for receiving all the visitors attending the World Cup, “It gives me great pleasure to declare that OR Tambo is on track for 2010 and beyond” he said.

According to the airport’s project manager, Kesavan Naicker, the handicapped have also been taken into consideration. Sloping floors have been opted for instead of stairs in the terminal. For the visually impaired, the elevators also use voice-recognition technology, making moving around the airport easier.

Naicker also added that once construction is completed, there will be enough capacity to meet growth in passenger numbers until 2015, after which they would consider further extensions. Construction has been underway for the past 10 years.

A much needed facelift

The launching of the new terminal forms part of a R3-billion ($366-million) construction overhaul for the airport.

Apart from the new terminals, progress is underway to complete a new 5 200 bay multi-storey parkade. The complete parkade is expected to start operating in the first quarter of next year.

Outside, the pavement of the runway and taxiways for the planes on the eastern part of the airport, have been rehabilitated and upgraded to accommodate the new A380 airbus.

According to Acsa, the O.R. Tambo International Airport is the air transport hub of Southern Africa, catering for more than 17 million passengers each year.

The staff component is made up of more than 18 000 people employed by various companies. The airport is centrally located in Johannesburg. It’s a 20-minute drive from the eastern suburbs of Johannesburg and a 45-minute trip from Sandton and Rosebank, where most international visitors prefer to stay.

Situated within the airport complex is the luxurious Airport Sun Intercontinental, a five-star hotel with top-class 24-hour service. Guests are not restricted to a check-in or check-out time, and meals can be ordered around the clock.

For those looking for more affordable accommodation, there’s the Holiday Inn hotel just outside the airport exit. Another Holiday Inn Garden Court is less than a kilometre away.

Getting to and from the airport has also been simplified over the years. All passenger drop-offs take place on an upper roadway, while all pick-ups on a lower roadway.

Passengers parked far from the terminals can also make use of a shuttle and golf cart services. For those with heavy luggage, porters are constantly on stand-by to help.

Foreign visitors wanting to change their currency into the local South African Rand, can do so at the many forex dealers available. General banking services, automatic teller machines (ATMs), as well as a choice of car rental services can be found at the airport.

OR Tambo also enjoys a large number of international airlines that fly from the airport to various destinations around the world.