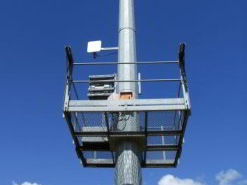 Mobile use is soaring across the African continent, with every second person now reachable by phone.
(Image: MediaClubSouthAfrica)

Africa is claiming its place at the forefront of telecommunications.According to new research by Informa Telecoms & Media, the continent has exceeded the 500-million mark for active mobile subscriptions. Every second person living on the African continent can now be contacted by phone.

According to Informa analyst Thecla Mbongue, these figures mainly show growth in the use of mobile phones used for basic voice telephony. Data connections represented about 8% of total subscriptions in 2010. Mbongue says that the African continent represents 10% of global mobile subscriptions.
There are still many opportunities in the mobile market for investors in growth areas such as the voice segment in under-penetrated markets, and the non-voice segments with mobile broadband and mobile money services. Mbongue says that these services would apply to both business and private markets.
She says that, to some degree, high computer prices still restrict the use of mobile broadband services to the top end residential and business segment.
The mobile money service targets the mass market, as this is mainly unbanked. She says that the difference between mobile money and Internet banking is that customers do not need a bank account to access the former. Access is possible via the menu on a mobile phone.
“Mobile money services make it possible for customers to send and receive even very small amounts, and sometimes it also enables them to pay for basic services such as utility bills and school fees,” says Mbongue. By 2014 the number of mobile money users in Africa will have risen to almost 360-million.
South Africa’s MTN, France Telecom (Orange), India’s Bharti Airtel, Vodafone/Vodacom and UAE based Etisalat have all expressed interest in gaining a bigger footing in the African mobile market.

“The expansion of networks and the decreasing price of handsets are key drivers to more people using mobile phones,” Mbongue says. The Informa report also says that the landing of new submarine cables on the east and west coasts of Africa over the past 18 months is boosting the continent’s international connectivity. It has also created more possibilities for data services.
According to an Ernst & Young telecommunications study titled Africa Connected: A telecommunications growth story, many operators and governments have also embarked on projects to build national and metropolitan fibre networks to enable easy access to new services.
The findings of Ernst & Young’s research, conducted in the third quarter of 2008, are based on interviews with 28 senior role-players in the African telecommunications industries. The telecommunications study shows that from 2002, the French telecommunications market grew at a compound annual growth rate of 7.5% and the Brazilian market at 28%. In comparison, the African market experienced 49.3% growth.
Growth in the African economy, fuelled by a commodities boom and increased liberalisation, is believed to be the main reason for the increase. The Ernst & Young study foresees that the African telecommunications market will grow faster than any other region in the next three to five years.

Ernst & Young also expects data to become a revenue generator in Africa, even though voice services are likely to remain the largest contributor to operator revenues in the medium term.
The provision of internet access is a big market, but Mbongue says much work still needs to be done to expand it. She says that at the beginning of 2010, the rate of household broadband access in Africa was only 2.5%. The Informa report findings predict that by 2015, there will be 265-million mobile broadband subscriptions in Africa – a significant increase from the current figure of about 12-million.
The Ernst & Young survey indicates that as competition in the mobile market escalates, innovation and operational efficiency will become more important. It also appears that even with the worldwide recession, new licenses were still being issued and mergers and acquisitions were still taking place in Africa in the past year.
Nomalanga Nkosi, GM for Business Marketing at MTN Business, says that mobile subscriptions are changing the way business works.
“Gone are the days when mobile subscriptions were only used to receive and make calls,” she says.
Today, mobility is one of the fastest growing trends in business. Many companies have become more aware of the business value that mobile technology brings in terms of productivity, integration and return on investment.
“It is easy to see why investments in mobile applications and technologies will increase through 2011, as organisations begin to ramp up both business-to-employee and business-to-consumer mobile spending,” Nkosi says.
In the next five years Informa expects the strongest growth rates in mobile subscriptions in East and Central Africa. Mobile subscription numbers in Ethiopia, Democratic Republic of Congo, Eritrea and Madagascar are likely to more than double by 2015.

Telephony services are now widely available in Africa, but Mbongue says that there are still many more markets to develop. For example, in rural areas the rate of mobile access is less than 10%.
Operators still face many challenges such as regulatory and political uncertainty. Ernst & Young’s study says there is a big need for regulatory independence.  Although political stability in Africa has largely improved, operators are cautious of government interference in the regulatory process.
The absence of reliable infrastructure such as power is another concern. Operators also find it difficult to draw the right candidates to fill important technical and management positions, and retain this talent. However, findings suggest that this challenge is not seen as unique to African operators.
Operators also have to keep in mind that African markets are at different stages of economic, social and telecommunications development. Only six countries – Libya, Tunisia, Algeria, Gabon, Seychelles and South Africa – have penetration levels of more than 80%, while 24 countries fall below the 20% penetration mark and 17 have mobile penetration levels of less than 10%.
Demographics also play a role. Countries such as Seychelles and Gabon, with penetration rates of 108% and 91% respectively, have smaller populations and higher mobile uptake levels. Larger countries such as Nigeria, with a population of almost 150-million people, should take longer to reach high penetration levels.

The role of SMS

Short-format text messages have become part of our day-to-day lives, but the experts say that it is no longer only a means to keep in touch with friends and family. Dr Pieter Streicher, MD of BulkSMS.com, says short message services (SMS) are also taking on a new role and improving communication globally. These days, SMS is used in crime fighting, reporting on political unrest and weather reports.
Streicher says figures released earlier this year by former Nokia executive and mobile expert Tomi Ahonen show that 53% of the world’s population and 78% of the world’s mobile phone users send and receive SMSs.
“If you look at the overall number of users, SMS eclipses email by 2.6 times, despite email having been around for 39 years and SMS for only 17,” says Clay Shirky, a respected digital media commentator.
Thanks to SMS, farmers in rural Kenya can obtain market prices for their goods using their mobiles. This allows them to decide beforehand which market will be paying more for their produce. Shirky says that this is a good example of how access to information via SMS is helping previously economically disadvantaged people.
Increased access to mobile phones in Africa has made it possible for more people to make use of SMS services. He says a lack of other communication channels such as fixed lines and email has led to the rapid adoption of SMS in Africa and other third world regions. The other advantage of SMS is that it is user friendly, readily available, and relatively inexpensive.
“It isn’t surprising, then, that many grassroot innovations, and clever ideas that the phone manufacturers almost certainly never dreamt of, take place in Africa,” he says in a report. These days, mobile phone users can even get SMS reminders to take anti-retrovirals and other important medication.
Africa is on its way to becoming a success story in all aspects of telecommunications.  The Ernst & Young study reports that there are many expectations and the continent is set to become a central focus of global telecommunications operators and vendors in the next five years. The good news is that Africa is shaking off its reputation as a market only for brave investors, to being seen as a region open for business and investment.