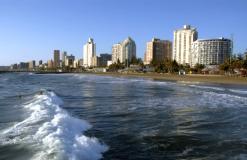 With its top sporting, recreational and
hospitality facilities, and a world-class
convention centre, Durban is a perennial
favourite with visitors.
(Image: MediaClubSouthAfrica.com. For
more free pictures, visit the image library)

South Africa is open for business – this is the emphatic message delivered by the Department of Tourism during the recent Meetings Africa gathering.

Said to be Africa’s biggest business tourism business trade show, the event took place at Johannesburg’s Sandton Convention Centre from 28 February to 1 March, and attracted influential buyers from around the world.

It’s a flagship marketing initiative of South African Tourism (SAT), and focuses on the so-called MICE (meetings, incentives, conference, and exhibitions) industry, with offerings that appeal to local and international buyers alike.

Meetings Africa 2012 also saw the launch of the National Convention Bureau (NCB) which is going to play a crucial role in harnessing national tourism efforts.

“The NCB will add considerable value to the country’s business tourism industry,” said tourism minister Marthinus van Schalkwyk, “and will strengthen and support efforts already being made to drive expansion in business tourist arrivals to make South Africa a truly global force.”

Van Schalkwyk pointed out that through the successful staging of major events such as the 2010 Fifa World Cup, the recent COP17 climate change conference, and other sporting, business and tourism events, South Africa has established its credentials as a competent global host.

He also said that South Africa has an advantage in that the country has world-class business and conference facilities, but also excellent leisure tourism attractions and hospitable and friendly people.

The NCB was established in November 2011 and is headed by executive director Amanda Kotze-Nhlapho, who joined SAT after a successful tenure as head of convention bureau and events at Cape Town Routes Unlimited.

“We believe that the industry is ready to contribute to the economy,” she said.

The NCB will offer services such as support with the planning of conventions, all aspects of the bidding process, and on-site event services.

A presentation on the first day by Mabeka Makola, SAT’s brand experience manager, gave details about the organisation’s SAT’s Welcome Campaign, aimed at inspiring all South Africans to welcome visitors warmly and so encourage them to return.

He said that perception of the country is a crucial factor not only in bringing visitors back, but in inspiring them to spread the word about South Africa back home.

“It’s about everyone working together to emphasis the small things that will have a greater impact on visitor perception in the long run.”

The initiative is going into its second phase of implementation, which brings the consumer on board. The first phase involved talks with the trade.

“We need to partner with small businesses to make sure that this campaign reaches the full potential, because its success relies on partnerships,” said Makola.

Significance of the BRICS partnership

A Meetings Africa panel discussion highlighted the role South Africa’s BRICS membership has played in in fuelling trade and investment in the country.

Soni told the audience that the move to join BRICS has enabled South Africa to connect with the big growth economies in the world, and tap into their lucrative markets.

“President Jacob Zuma has shared that since we joined the BRICS family, our exports grew four-fold into those countries and our imports into the same countries doubled,” said Soni. “It therefore makes business sense to play with the largest growing economies in the world.”

She added that to make the most of these opportunities, long-term strategies were needed, and these were in place.

Demidova indicated that there is great interest in South Africa from the Russian side. “Russians are interested in what is going on in this country, and are looking at the destination as an event alternative.”

She hinted at the possibility of direct flights between South Africa and Russia in the future, likening the concept to the recent non-stop flight to China recently introduced by South African Airways.

South Africa and China have set up bilateral agreements in many areas, including transport, education, housing, infrastructure, and water resource management.

The introduction of non-stop flights between South Africa and Russia promises to facilitate business and leisure travel between the two countries, said Demidova.

She said that South Africa should continue to focus on issues of access to the country, such as visa requirements, flight length and destination promotion. She revealed statistics from Russia which show that since Latin America dropped visa requirements, travel from Russia to that region increased exponentially.

Ji shared Demidova’s sentiment, and indicated that the Chinese people want to know more about South Africa and how to do business with the country.

“Our focus is on cooperation and looking for a win-win situation,” she said. “We are very open to forming new partnerships and are looking at a long term interest.”

Devarajan said that there are a number of elements to consider when planning a MICE tour.

“The planner wants a focus on logistics, access and customising an itinerary to suit the traveller, while the tourist wants to see new things, experience new sites and enjoy nightlife and shopping. Corporate visitors want more bang for their buck and are concerned about safety” he explained.

In terms of Indian visitors to South Africa, Devarajan said that their numbers would increase if hotels offered more Indian products, such as Indian television channels and cuisine.

The bottom line for business tourism, said Soni, is that South Africans need to speak with one voice.

“Business, government, society and the media need to communicate accurate messages, and we all need to be ambassadors for our country.”